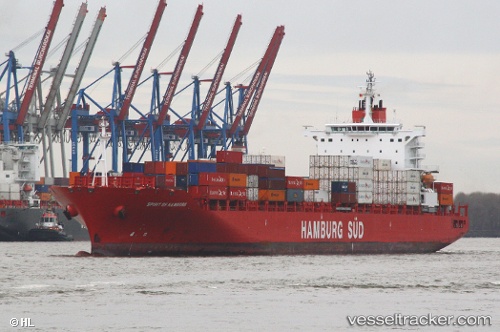 Investigations regarding death of captain going on

No arrests have been reported in connection with the death of the captain of the 'Spirit of Hamburg' while it was in port in Colombia. Rumors have swirled since said . Myo Tun Zaw was found dead on April 16. Some reports say members of his own crew murdered him. Others said he was killed by an intruder on board the vessel while it was berthed at the Port of Cartagena. The 'Spirit of Hamburg' is managed by Zeaborn Ship Management, and the company's CEO, COO and CFO posted a statement on April 20 in which they said the captain's "officers and crew on board and all of us on shore share [his family's] grief and are asking ourselves what happened and why." The statement from Zeaborn Chief Executive Officer Rob Grool, Chief Operating Officer Michael Brandhoff and Chief Financial Officer Erik Kruse said, "There has been a lot of speculation on social media and in the regular press on what exactly happened, but as long as the authorities have not finished their investigation and announced official results, we believe it is inappropriate to draw any conclusions or to make any statements on their findings. "What we want to confirm is that the ship is registered in the Isle of Man Register and dismiss reports of German flag and jurisdiction," the statement said. "The crew of our vessel originate from Myanmar, Ethiopia and Russia and, contrary to some media reports, not from the Philippines. They are all professional seafarers whom we are supporting to the best of our ability and who have been offered psychological help." An earlier statement released by Zeaborn over the weekend said the captain, who was from the Southeast Asian nation of Myanmar, "suffered fatal injuries following what is believed to be a violent incident with an intruder." One media report said the captain was killed in a fight with his crew and that the Spirit of Hamburg was a German-flagged ship. A Colombian radio station said there was a conflict with 12 Filipino crew members and the "51-year-old Burmese captain." Zeaborn, a third-party ship manager based in Hamburg, Germany, and Singapore, said it was cooperating with Colombian authorities, who have allowed the vessel to move from berth to inner anchorage during their investigation. In a press release on April 20, the General Directorate of Maritime Colombia only said there were 21 crew members on board the Spirit of Hamburg and that the captain was found dead on the main deck at about 5 p.m. on April 16. The vessel had departed the port of Charleston in South Carolina on April 10.

Bad injuries caused by blunt weapon and bruising and lacerations on the hands for trying to defend himself were found on the body of the captain of the 'Spirit of Hamburg' who was killed in the waters of Cartagena off the island of Tierrabomba on April 16. The victim was wrapped in adhesive tape to prevent, perhaps, that the blood betrayed the crime. Although the German company Zeaborn Ship Management, owner of the ship, has reported that the crime was committed by intruders, the Colombian authorities suggested that Captain Myo Tun Zaw, 50, was allegedly killed by members of its own crew. The Attorney General's Office announced on April 18 that the criminal investigation to determine the cause, manner and mechanism of death of the captain were investigated. The ship arrived in Cartagena from Charleston and was scheduled to set sail that night. That is why one of the hypotheses pointed to the fact that the captain's body was going to be thrown into the sea because of the way he was found- Information indicated that a security guard had heard screams, but since they were in another language, he did not pay attention. However, he called the authorities to rule out and that was when the crime was discovered. On the ship, in addition to Burma's captain Myo Tun Zaw, there were 20 crew members. Before the pronouncement of the Prosecutor's Office, which assumed the investigations, after CTI members carried out the judicial inspection of the body and took it to the Legal Medicine morgue, in Cartagena, there will be two official inquiries to establish what happened on the ship, , once under the United Nations Convention on the Law of the Sea, and under the jurisdiction of its flag state, which will have primary responsibility for the investigation. In an official statement, the managers of Zeaborn Ship Management reported that in the afternoon of April 16, 2020 one of his valuable seafarers from the 'Spirit of Hamburg' has suffered fatal injuries after what was believed to be a violent incident. with an intruder on board the ship in the port of Cartagena. Zeaborn Shipmanagement wished to express its sincere condolences to the family and friends of seafarers. The family members of the crew member have been notified and will be offered full support at this difficult time. The 'Spirit of Hamburg' crew will receive psychological help after the tragic death of their colleague. All relevant authorities and parties have been notified. With reference to the death of Captain Myo Tun Zaw, the General Maritime Directorate reported that the ship had arrived at the port of Cartagena on April 16 at 07:40 a.m. with 21 crew members on board, in order to carryout container loading and unloading operations at the facilities of the Cartagena Regional Port Society. At 5 p.m. a report was received by the Protection Officer of the Cartagena Regional Port Society reporting the death of the captain, who was found on the main deck of the ship. The specific circumstances of time, mode and place were the subject of investigation by the Colombian judicial authorities. Spanish report with photo: https://www.bluradio.com/judicial/investigan-presunta-violacion-al-codigo-de-buques-en-caso-de-capitan-asesinado-crbe-248447-ie430

What happened on the Spirit of Hamburg?

The Zeaborn Ship Management worte in a press release that they would not comment further on the case because the police was conducting the investigation. However, the company stated that it was aware of social media posts that referred to the crew as being Filipino. "This is not correct," according to the Zeaborn Ship Management. The captain was fatally wounded after "what is believed to be a violent assault by an intruder on the ship". The Colombian media portal Portuario quoted a senior Cartagena Metropolitan Police officer as saying that the captain "was apparently attacked by the crew," according to initial information from the national police. Zeaborn Ship Management announced that they have sent representatives to Cartagena to support the crew, who were also being offered psychological assistance. Full statement: "Managers Zeaborn Ship Management regret to advise that in the afternoon of 16 April 2020 one of its valued seafarers of its managed container vessel Spirit of Hamburg has suffered fatal injuries following what is believed to be a violent incident with an intruder onboard the ship in the port of Cartagena, Colombia. Zeaborn Shipmanagement would like to express its deepest condolences to the family and friends of the seafarer. The next of kin of the crew member have been notified and will be offered full support in this very difficult time. The crew of Spirit of Hamburg will be receiving psychological help following the tragic death of their colleague. Immediately after the incident all relevant authorities and parties have been notified. Representatives of the company have arrived in Cartagena for further support to the crew. The exact circumstances of the violent incident are yet unknown and police have started an official investigation into the events and conducted interviews with the crew of Spirit of Hamburg. In order to not interfere with the investigation of the local police Zeaborn Shipmanagement will refrain from making any further statements at this stage. Authorities in Colombia have meanwhile granted permission for the vessel to move from berth to inner anchorage. Zeaborn Ship Management is aware of social media reports circulating that the crew would be of Filipino nationality. This is incorrect. We would like to add that three senior officers are one month beyond their contractual relief date, but they are showing great professionalism in making the best of the current relief/repatriation restrictions. All other crew are due for relief between now and October."