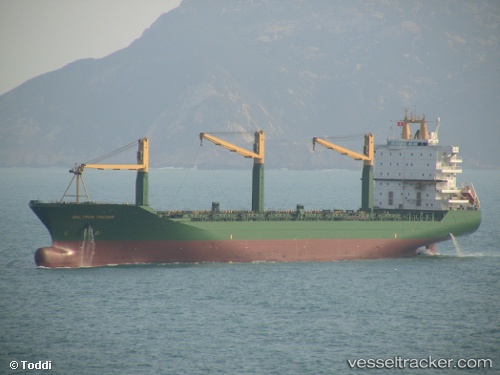 In the typhoon Lingling the 'Xin Ou 21' developed a heavy list to starboard side in the night of Sep 5, 2019, off Zhoushan, while en route from Xiamen to Rizhao. 72 containers were lost over board. The ship could be anchored north of Zhoushan. The authorities dealt with the recovery of dozens of containers and their contents, which were floating in the sea and scattered around the coastline. Recovery operations were under way, all ships navigating in the area were warned of the navigational hazards. White containers floating in the sea were loaded with packaged frozen meat. Red, blue or green containers were loaded with A4 paper or wood. The packaged frozen meat, paper and wood in some containers have been scattered around and some of it picked up. On Sep 7, the government of Putuoshan Town, Putuo District, Zhoushan, issued an urgent notice that a large number of frozen meat and animal internal organs products (mainly beef, pig, chicken and duck viscera) were scattered along the Putuo Mountain. All the meat products were damaged and should not be consumed. After the typhoon had passed, 15 patrol boats were searching the main waterways at Qionglai, Lushan, Maju, Putuoshan, Shenjiamen and Liuheng. 36 containers were found in Putuoshan and on Baisha Island in Zhoushan. Nearly 20 containers have been disposed of or have sunk, one in Ningbo Xiangshan has been salvaged, and another three to four have been towed to Xiangshan Port by fishing boats. On Sep 9t at 4 p.m. 18 boxes have been salvaged. In addition, 15 containers were found at the west side of the Putuo Mountain in Zhoushan, and nine containers were found in the Xiangshan Sea area of ​​Ningbo, which were still to be salvaged. Japanese reports with photos and video: http://www.eworldship.com/html/2019/OperatingShip_0909/152613.html http://www.jiaxingren.com/folder22/folder286/2019-09-10/532168.html