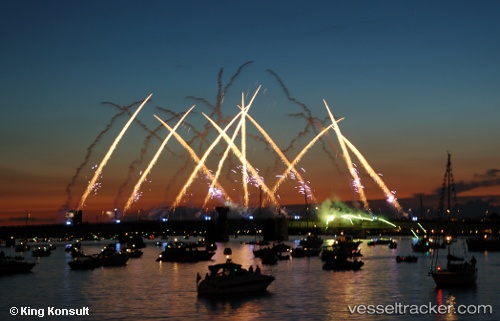 Aalborg Harbour A/S is planning a new, larger container terminal under the working title Aalborg Container Terminal 2. The terminal is scheduled to be placed in the 180,000-square-foot area east of the current basin where the existing container terminal is located."The future of Danish container ports is controlled by the development of feeder connections to and from the ports of Hamburg, Bremerhaven, Antwerp, Rotterdam and Amsterdam. Aalborg Harbour will try to maintain and develop transit goods, primarily to and from the North Atlantic and secondary to and from the Baltic Sea. It would only make sense to sail between the large continental ports with the giant ocean-going ships and let feeder traffic stand for direct delivery ", says Claus Holstein, Managing Director of Aalborg Harbour A/S. The water depth along the 500 meter long berth and crane coverage will meet the demands of feedermax ships. The terminal will include all functionalities, such as a material yard, 24 hour deployment facility,facilities for SKAT and veterinarians and more. All available estimates suggest that Aalborg's container business will grow in the future and that capacity runs out in 2022 when the port exceeds 100,000 TEU per annum. With plans for Aalborg Container Terminal 2, Aalborg Harbor Logistics A/S will address the scenarios considered with the involved parties and create more capacity for container business so that the whole may reach 200,000 TEU per annum. There is no final decision on the launch, but it is expected that a new terminal will be operational in about two years from the launch. The existing container terminal will be open during the construction phase, and depending on developments in general can also be used in future. It may also be upgraded as needed. Source. Aalborg Havn / Maritime Denmark

Denmark’s Aalborg opening its new city centre cruise berth on May 25, and Fred. Olsen Cruise Lines cruiseliner Balmoral is scheduled being the first ship to berth. The new Aalborg Royal City Berth is in the centre of the town, making it convenient for passengers to go ashore. The quay is also used by the Danish royal yacht Dannebrog.