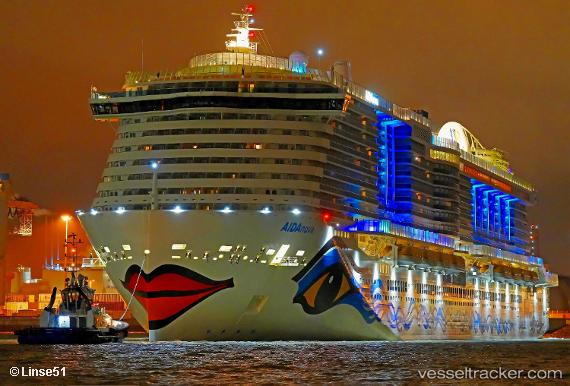 On Feb 1, 2022, at 1 p.m. the 'Adianova', en route from Funchal to Santa Cruz de Tenerife, requested the medical evacuation of a passenger 102 miles north of Punta Anaga. Salvamento Marítimo tasked the SAR helicopter Helimer 215 to take the patient off. He was hoisted along with a companion and taken to the Tenerife North airport, from where he was taken to hospital for further treatment. The cruise ship berthe in Santa Cruz on Feb 2 at 5.20 a.m.

The investigation of the Public Prosecuter Northern Netherlands regarding the arson on the 'AIDANova' in Eemshaven on Oct 24, 2018, was to be closed. One German, who previously worked on the ship, was suspected in this case. The man, who lives in the Leipzig area, has been questioned by both the Dutch and German police. But there was insufficient evidence against him. The ship was delivered shortly before by the Meyer Werft in Papenburg and still had to start its test run. Almost immediately the suspicion arose that the fire had been caused by arson. Because there were no other suspects in the picture, the prosecutor closes the file.

AIDAnova, First Ever Ship To Be Supplied Low-Emission LNG In The Mediterranean

On April 26, 2019, AIDA Cruises and numerous representatives from politics, port-related businesses and tourism celebrated the first-time arrival of the world’s first LNG cruise ship in Barcelona. On the same day AIDAnova was fueled for the first time in the Mediterranean with the lowest-emission fuel currently available to shipping industry, in Europe’s biggest cruise port. As of now, alongside Palma de Mallorca, Barcelona has become not only the second start and end destination for AIDAnova’s seven-day cruises in the Mediterranean: Thanks to a partnership with Shell, the cruise ship will also be regularly supplied with liquefied natural gas (LNG) at the Spanish metropolis.