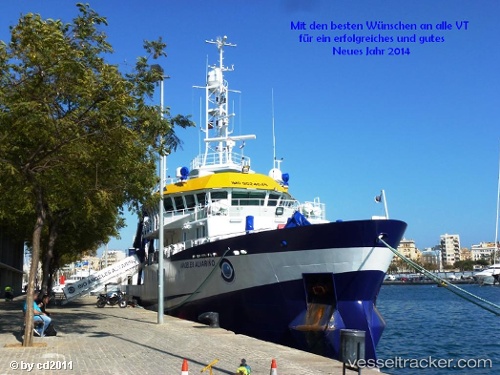 Search for child and his father coming to its end

The head of the Court of Violence against Women of Santa Cruz de Tenerife will allow the cease of the search for Tomás and Anna Gimeno by the 'Ángeles Alvariño' in the coming days, concluding that it is impossible to continue with these tasks, due to the steepness of the underwater terrain that is being tracked. The ship's operations manager describe the area where new results could be found as "completely unapproachable" for the exploration. Given the underwater currents it cannot be guaranteed that a body weighed down with a diving belt would not roll away and could reach an undetermined place and, therefore, outside the search capacity available. Before, an unmanned robot located and recovered the body of one of Tomás Gimeno's daughters, Olivia, inside a weighted sports bag. Next to that bag there was another one with similar characteristics in which the father supposedly dumped the body of the youngest of his daughters, Anna, but it was cracked and empty. After that discovery, on June 10 the 'Ángeles Alvariño' found two oxygen bottles in a more remote area, where investigators suspect that Tomás Gimeno threw himself into the sea to commit suicide. As the Civil Guard was able to verify in the framework of its investigations, during the long drift of the boat of the alleged filicide after the loss of his mobile signal, for a short period of time the engines started working again and Gimeno navigated for about three minutes. The report sent to the judge detailed that the point where the engines stopped again became the most likely point where Tomás could have thrown himself into the sea, and it is from this point that a new search area was set in 500 meters depth. In that area, the Liropus 2000 underwater robot made 176 lines and transits with a total distance traveled of 60,006 meters and an explored area of ​​611,903 square meters, which was later expanded on both sides. Then the discovery of two diving 'bottles' that belonged to Tomás Gimeno took place, a type of bottle that gives a very limited air supply. Investigators speculate that the father used them in his suicide attempt to ensure he reached the necessary depth to avoid turning back. Search patterns were established five meters apart from each other around the area where these two bottles were found in order to be sure that no objects were left in the area, no matter how small. The researchers also looked for the lead belt that Tomás Gimeno may have used to ballast himself, which would confirm that he was adrift, but it could not be found.

Search to be continued unti ROV breaks down

The 'Ángeles Alvariño' plans to continue searching for Anna and Tomás until the underwater robot with which it is equipped breaks down definitively. The ROV has already exceeded its estimated working time and needs to return to the base in Vigo (Galicia) for maintenence, which would take several weeks of interruption in the search. As for the underwater robot offered by the Tenerife Council, it is confirmed that it is not qualified for the task.

The search of the 'Ángeles Alvariño' for Tomás Gimeno and little Anna was scheduled to end on June 17. However, the mission has been prolonged and alternatives were being sought for when it leaves permanently in case the objective of finding father and daughter has not been achieved by then. For now, the ship has been moved to where the last signal from Gimeno's mobile was registered. Both the investigators and the judge in charge of the case and the girls' family were clear that Gimeno planned everything almost millimetrically to cause the greatest possible pain to Beatriz Zimmerman, his ex-partner and mother of Anna and Olivia. He wanted to plunge her into the lifetime uncertainty of not knowing what the fate of her daughters had been. That is why he chose the place to throw the sports bags into the sea in an area off the coast of Tenerife that has been used for years as a ship dump. In such a marine environment, finding any trace of the girls was difficult. However, the anchor to which he tied the two sports bags got caught in one of those ship wrecks and caused them not to descend to the bottom. That helped the ship's crew to find the body of six-year-old Olivia last week. The other bag, which Anna is believed to have presumably been inserted into, was broken. After the elder sister was found, the search has been focused for days on finding the younger and her father. However, the more time passes, the more the chances of finding them vanished. The last signal received by the cell phone placed the father about 20 kilometers from the place where Olivia was found. One of the hypotheses was that he went there and committed suicide.