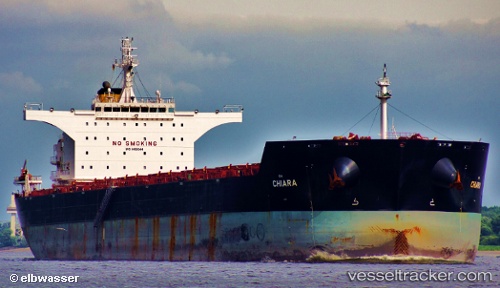 A VTS Measure was in place closing the Mississippi River at river mile 3,5 above the Head of Passes after the "Anglo Alexandria" ran aground in pos. 29° 11.87' N 089° 16.22' W at Cubit’s Gap on Jan 4, 2018, and was blocking the channel. All vessels had to stop, or if unable to stop, proceed with extreme caution. The tugs "Mardi Gras" (MMSI: 367716330) and "Louisiana" (IMO: 8423947) were sent to refloat the vessel. There were over 50 vessels waiting in queue to transit in or out of the river. This number was larger than normal due to dense fog in the area over the last few days. After the bulkcarrier was refloated, ot exited Delta and moored at the East Bay Anchorage. The "Anglo Alexandria" was enroute from Plaquemines Parish Port to Suez and had an ETA as of Jan 22.

The Panama Canal’s contracted vessel transited the new Atlantic-facing Agua Clara Locks yesterday. These transits, performed by the neopanamax dry bulk carrier Baroque, are part of a series of training events occurring in the run-up to the expanded canal’s June 26 inauguration. The vessel, which arrived in Panama this week, has a length of 255 m and a beam of 43 m, and was contracted by the Panama Canal to perform multiple lockages through the expanded locks for testing and training purposes. http://splash247.com/neopanamax-makes-history-with-first-transit-through-expanded-panama-canal-locks/

A Baby Cape size dry bulk carrier Baroque will start daily transit trials through the Panama Canal’s new Atlantic-facing Agua Clara locks in preparation for the opening of the Canal’s expansion in June, said Panama Canal Pilot Training Coordinator Peter Pusztai in an industry newsletter Tuesday. “The vessel will be used to perform multiple daily lockages through the new Atlantic-facing Agua Clara locks,” Pusztai said. In addition to testing the new locks, these transits will also enable pilots, tugboat captains and deck officers to practise operating within the expanded Canal, he added. The vessel is expected to arrive at the Panama Canal June 7. S&P Global Platts trade flow software cFlow showed the vessel left Vadinar, India, May 2 and is expected to reach Durban in South Africa May 16. Built in 2011, the 114,248 dwt Baroque is 255 meters in length and has a beam of 43 meters.