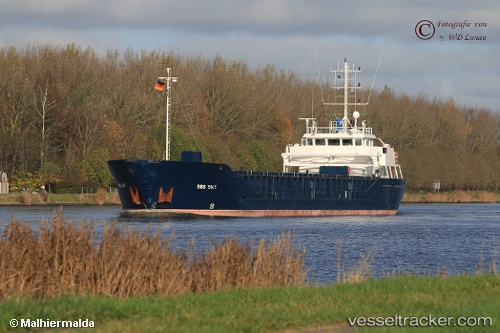 The "Anouk", being en route to Gdynia, sustained a hole in the outer shell plating of the ballast tank in the port of Liepaja on Aug 14 ,2018. The shore crane jib broke and fell onto the hull thereby causing the damage. No pollution has been reported, and the vesselwas repaired in Liepaja. It left the port on Aug 17 at 12.30 a.m. and berthed in Riga on Aug 17 at 8.15 p.m.

On Oct 29, 2015, around 2 a.m. the "BBS Sky" was in collision with the "Hongkong Express" 10 miles north of Hollum off Ameland island. Both vessels were proceeding in northeastern direction snd probably contacted each other when one was overtaking another. Both vessels seemingly didn’t suffer serious damages and were continuing their voyages. The "BBS Sky" changed course and was heading north.She had been en route from Figueira da Foz to Szczecin. The "Hongkong Express" was en route from Rotterdam to Hamburg.