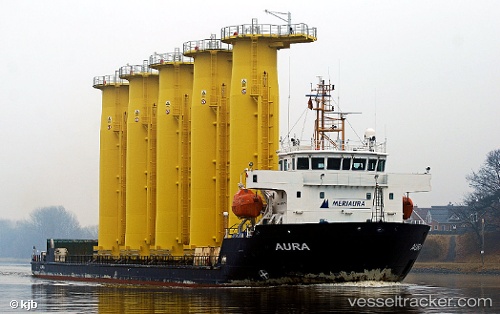 On June 30, 2017, at 6.10 a.m. the "Aura" allided with the fairway buoy L2 SE of Ruegen island. The unloaded ship had sailed from Gdynia on June 29 to load a cargo of crane parts in the industrial port of Lubmin. Strong winds and currents diverted the vessel from its course, and it hit the buoy with the port side stern. The buoy was sunk. In the midday hours the police Wolgast investigated the accident, and the master had to pay a safety fine of 228,50 Euro. The ship left Lubmin on July 1 at 10.15 a.m. bound to Rostock, where it arrived at 8.30 p.m. and was meanwhile underway to Antwerp, ETA July 4, 10 p.m.

On Oct. 17, 2012, Norddeutsche Seekabelwerke GmbH (NSW), a wholly-owned subsidiary of General Cable, received a newly refurbished DP2 cable laying vessel under a long term charter agreement from the vessel management company Meriaura. The vessel M/V Aura has been refurbished to the exact specifications of NSW and will greatly enhance its ability to install subsea energy cable. More to read at http://www.seanews.com.tr/article/TURSHIP/ENERGY/88141/-Cable-Laying--Charters--europe--Germany--MV-Aura--News-by-topic--NSW--vessel./