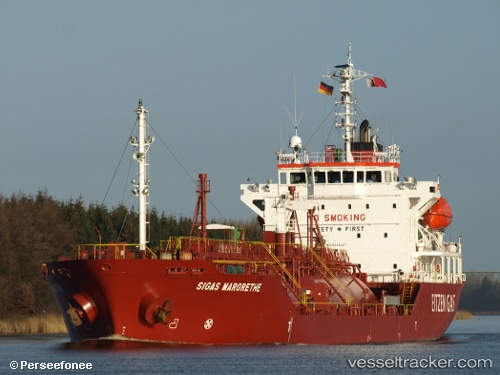 A crew member of the 'B Gas Margarethe' went over board and sparked a huge emergency response from multiple agencies lasting for more 7,5 hours on Feb 15, 2020, as Storm Dennis loomed large over the county, with winds of up to 70mph and heavy rain on the way. The HM Coastguard was coordinating the search and rescue mission after reports of the man falling overboard off Margate Harbour at 5.40 a.m. The man didn’t turn up for his shift and wasn’t in his cabin, resulting in the the alarm being raised. TheRamsgate and Margate RNLI, a Coastguard helicopter, police and HMS 'Westminster' were involved in the SAR operation to scour the coast and shoreline. A man’s body has been found in the sea by the Margate RNLI boat at 1 p.m. He has been brought to shore. Enquiries were ongoing to establish the identity of the man and inform his next of kin. Report with photos: https://theisleofthanetnews.com/2020/02/15/margate-rnli-discover-body-during-search-for-man-overboard-from-gas-tanker-vessel/

The "B Gas Margrethe", en route from Tees to Port Jerome with a crew of 16 on board, suffered a fault with the main engine injection pump about 5,5 miles from Dungeness point, in position 50 56 24N, 001 07 15E, on June 27 around 1 p.m. The vessel proceeded to an anchorage at St. Mary's Bay using its engine, but at a reduced speed and moored at the Dungeness Roads East Anchorage. The engineers had to dismantle the cylinder No.6 to check the condition of the piston rings. The estimated time to complete this work was 12 hours. On June 28 at 9 a.m. the damage has been fixed and the vessel resumed its voyage with an ETA as of June 28, 10 p.m.