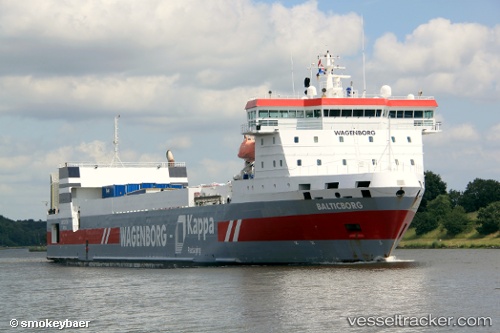 In Collision with other Freighter

At Lemwerder,River Weser the Bulkcarrier Pretty Universe IMO:9639775 and the Ro-Ro Balticborg IMO:9267716 came too close and collided for Reasons that are still unknown. Both Freighters were initially able to continue their voyage. The Balticborg goes to Neustädter Port, Bremen and the Pretty Universe go to MSC Gate,Bremerhaven

The "Balticborg", while sailing river upstream on the Weser in the evening of Dec 17, 2017, caused damage to the fishing gear of a fishing vessel which was anchoring off the Liener Kuh Sand at that time by its swell and suction. The damage was estimated to be in the 5-digit-Euro region-. The "Balticborg“ berthed in Bremen at 9 p.m. The master had to pay a safety fine of 353,5 Euro and was subject of an investigation by the water police Brake. The ship left Bremen again on Dec 18 at 11 p.m., bound to Sheerness, ETA Dec 20.

Royal Wagenborg has ordered Wärtsilä scrubber systems to clean the exhaust emissions from two of its RORO carriers, the ‘Balticborg’ and ‘Bothniaborg’. These will be Wärtsilä’s first deliveries of its scrubber systems to Royal Wagenborg. By installing Wärtsilä scrubber systems, the vessels will comply with the regulations covering emissions of sulphur oxides (SOx) while using conventional residual marine fuel (HFO). The Balticborg and Bothniaborg are employed on a long term freight contract with Smurfit Kappa for the weekly shipment of paper products between Haraholmen, Bremen, Sheerness and Terneuzen. These operating routes are located in the Baltic and North Seas’ Sulphur Emission Control Areas (SECA). The retrofitting of of first vessel will take place in the upcoming week at the shipyard Royal Niestern Sander, since the m.v. Bothniaborg arrived last weekend. Source: IAA Port News