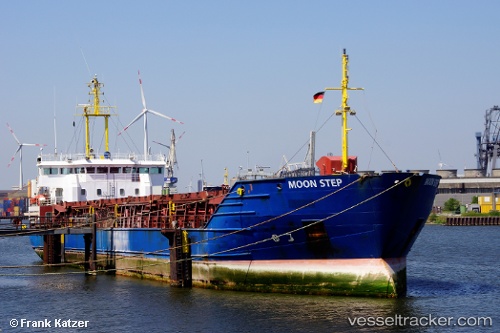 The 'Moon Step', while enroute from Stralsund to St. Petersburg, suffered a damage to its main engine on Dec 23, 2020. The vessel was taken in tow by th tug 'Protector' and taken to the Paljassaare Harbour in Tallinn, where it arrived on Dec 25. During the subsequent inspections, the No.7 cylinder liner of the main engine was found cracked. The repairs were commenced, and the ship left Tallinn again on Jan 6, bound for Szczecin. ETA Jan 9.

The 'Moon Step', while en route from Inverkeithing to Seville with 4.380 tonnes of steel scrap in bulk on board, suffered a main engine turbine problem and high temperatures in position 55 18 33 N, 000 54 26.0 W, 25 miles northwest of River Tyne, on Nov 29, 2019, at 3 p.m. It was expected that the issue could be fixed within two hours, and no assistance was required at this time. The weather on scene was rough but was becoming moderate. After repairs have been completed, the vessel continued on its way at 5.45 p.m. with an ETA as of Dec 8, 1 p.m.

The "Moon Step" lost its steering off Andros island, in the Aegean Sea, under unclear circumstances and went adrift. She was enroute from Istanbul, where she had sailed on March 11, 2017, to Eemshaven, ETA March 24. Vernicos Tugs & Salvage deployed two tugs to take the ship in tow. The vessel with a crew of eleven Ukrainian and one Russian national was loaded with cereals in Romania. On March 15 she was towed to Piraeus in good weather conditions with winds up to 4 Beaufort, and dropped anchor off Kicilkaterci at 2.30 p.m.