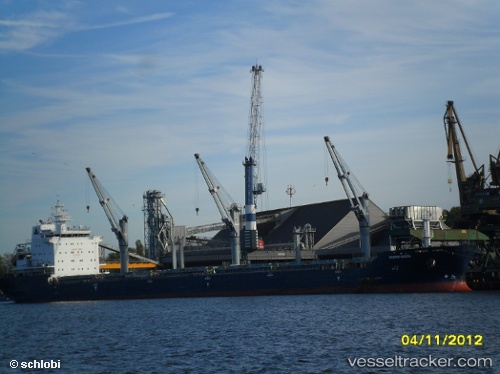 On Dec 30 at 7:45 p.m. the tugs "Ocean A. Simard" and "Evans McKeil" assisted in freeing the "Pacific Huron", aground since Dec 28 in St. Lawrence River east of Clayton, N.Y. The vessel was moved back into the channel and at 10 p.m. was at anchor, undergoing inspection before proceeding. The ship was loaded with soybeans.The RJ Marine Associates, Donjon Marine Co., Inc. and SMIT Salvage were active in the salvage effort. The ship arrived at the Iroquois Lock on Jan 4.

Three tugs were on their way on Dec 29 to the "Pacific Huron" which remained aground between Fisher's Landing and Thousand Island Park after losing propulsion. The plan was to take off some of the cargo of soybeans off the ship, lightening it enough so that it may refloat. A barge will be used to carry the soybeans from the ship. The tugs were scheduled to arrive at the ship on Dec 30 between 4 and 5 a.m. Although it was not blocking shipping, officials want to get the ship back underway in the next couple of days. The seaway was scheduled to close on Dec 31. A joint command has been established, involving the Coast Guard, the owners of the ship, a salvage company and the St. Lawrence Seaway Management Corp. On Dec 30 the tug "Evans McKeil" arrived at the ship. Report with photo: https://www.northcountrypublicradio.org/news/story/35349/20171229/seaway-freighter-runs-aground-near-wellesley-island https://scontent-frt3-2.xx.fbcdn.net/v/t1.0-9/26166185_10212548232074926_959728928479025773_n.jpg?oh=8764fe46dffcda63a08bc25981407bf6&oe=5AC2401E

The "Pacific Huron" ran aground in the St. Lawrence Seaway just east of Clayton, New York, late on Dec 27, 2017, at 2.20 a.m. The bulkcarrier got stuck near Fisher's Landing, being bound from Port Weller to Montreal, loaded with soybean. It got stuck near Wellesley Island with he foresip, while the stern anchor was deployed. The vessel was 1,000 feet outside of the channel. There were no reported injuries to the crew, and no reported leaks, pollution, or flooding on the vessel. The seaway was continuing to manage traffic around the vessel through the navigation channel. Inspectors from the SLSDC, the Canadian St. Lawrence Seaway Management Corporation and a marine inspector from the Coast Guard Marine Safety Detachment Massena, New York boarded the "Pacific Huron" as soon as possible to conduct their initial investigation and additional assessments. Report with photo: http://www.watertowndailytimes.com/news03/cargo-ship-runs-aground-in-st-lawrence-river-20171228