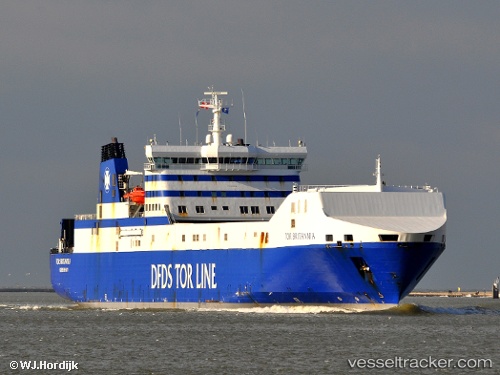 The crew of the 'Britannia Seaways', sailing between Vlaardingen and Felixtowe, found 25 migrants in a refrigerated container on the ferry's cargo deck on Nov 19, 2019. Everyone was reported to be in good condition. The 'Britannia Seaways' had left Vlaardingen heading for Felixtowe when, after a few hours of sailing, the crew discovered a hole in a reefer container. Upon closer examination, it was found that 25 migrants - including one child - were inside the box. The ferry immediately returned and sailed back to Vlaardingen where 20 ambulances were waiting for the ferry. Two migrants were taken to a hospital to be examined for hypothermia, while the remaining 23 underwent a medical check at the port before being handed over to the Dutch authorities. The nationality of migrants was yet to be determined. The driver of the refrigerator has been detained by the Dutch authorities, which also conducted a thorough investigation of the ferry to make sure there were no more migrants on board. DFDS continuously examines containers with dogs and measuring instruments, but in this case it was a sealed container that which normally does not get examined.

As of the end of November, DFDS will again be increasing the ship capacity on its two freight routes from Rotterdam to the United Kingdom. The reason for this is the continuing growth in freight traffic to the English market, for which DFDS already introduced extra departures in June, the company said in its press release.On the Rotterdam – Felixstowe route, the ANGLIA SEAWAYS will be replaced by the BRITANNIA SEAWAYS. As a result, it will be possible to ship an extra 300 trailers a week. This is in both directions. The change takes effect on 24 November and the ships operating this route will then be: SUECIA SEAWAYS, SELANDIA SEAWAYS and BRITANNIA SEAWAYS. There are daily sailings between Rotterdam and Felixstowe, with six departures a day from Tuesday to Friday.

One year to the day after surviving an explosive fire which threatened the lives of 32 people on board his vessel, Captain Andreas Kristensen and his crew of the Britannia Seaways have received the 2014 IMO Award for Exceptional Bravery at Sea, at a special ceremony on Monday, 17 November 2014