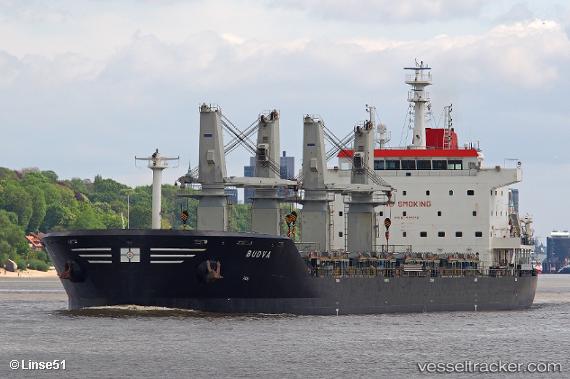 The berthing bulk carrier 'Pluto' (IMO: 9432531) slammed into the stern of the 'Budava' in Port Harcourt on Aug 6, 2020. She had been been berthed in port since July 27 and suffered hull breaches and gashes at the starboard bow area. Some of the fore mooring lines broke, when the 'Pluto', which was backing towards its berth, slammed into the other ship while manoevering astern. Video: https://www.youtube.com/watch?time_continue=73&v=QiyMAAxsURQ&feature=emb_title

Bulkcarrier minus one allowed to leave port again after drug bust

After the German police in Hamburg seized 500 kg of cocaine from the 'Budva' and arrested the Montenegrin crew member Mladen Radulovic from bar, the vessel sailed on May 4, bound for Lagos with an ETA as of May 19, after the other 22 crew members were questioned. The chief of the Montenegrin state shipping company Barska plovidba, Tihomir Mirkovic, said the ship sailed with all necessary permits and underplayed the seriousness of the situation. The ship had arrived at Hamburg from Santos via Casablanca. On May 2, the police directorate reported that they had cut drug trafficking links between South America and Europe. The Hamburg drugs bust and arrest were announced as the final result of a joint counter-drug operation involving law enforcement agencies of Montenegro, Britain, the Netherlands and the United States Drug Enforcement Administration, DEA.

Half a ton cocaine seized in Hamburg

The German police boarded and searched the 'Budva' in the morning of May 2, 2020, after the ship had arrived at the Habema quay in the port of Hamburg, coming from Casablanca. Half a ton of cocaine was found hidden in the cargo area. Of the 23 crew members, all of Montenegro nationalities, one was arreasted. The ship had sailed from Santos on March 13. The drug bust and arrest were the final result of a joint counter drug operation, involving law enforcement agencies of several countries, allowing that one more drug trafficking link between South America and Europe was cut.