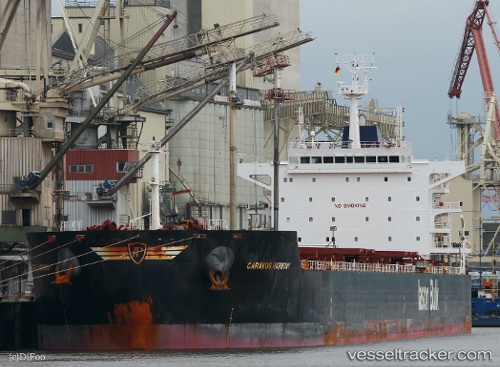 The Canadian Transportation Safety Board started investigating following the collision between the "Caravos Harmony", loaded with corn, and the "Pan Acacia", waqiting to take a cargo of coal, off Vancouver on March 17, 2019, just after midnight. The "Caravos Harmony" which had lost power and collided with the "Pan Acacia" suffered damage to its port side bow. The "Pan Acacia" sustained a hole at port side amidships. Both vessels were detained in port until repairs and other follow-up actions have been completed. The TSB deployed two investigators who arrived in Vancouver in the afternoon of March 18, started inspecting the vessels, talking to crew members, talking to any other witnesses and people who may have information about the sequence of events. The Vancouver Fraser Port Authority deployed its harbour patrol boats but found no imminent risk the vessels, its crews, the public or to the environment. The "Caravos Harmony" left its anchorage again on March 19 at 3 a.m. The "Pan Acacia" by this time remained moored in pos. 49° 18.10' N 123° 5.62' W. Reports with photos and video: https://bc.ctvnews.ca/tsb-investigating-cargo-ship-collision-in-vancouver-harbour-1.4341039?fbclid=IwAR2KXLFtZhgVpl407k3pJ4y3qNZu-u4VATK1wKzof0rHk6nAD-BM1oQ2Eis https://www.cbc.ca/news/canada/british-columbia/2-ships-collide-in-the-night-in-vancouver-harbour-1.5061395 https://bc.ctvnews.ca/mobile/tsb-investigating-cargo-ship-collision-in-vancouver-harbour-1.4341039