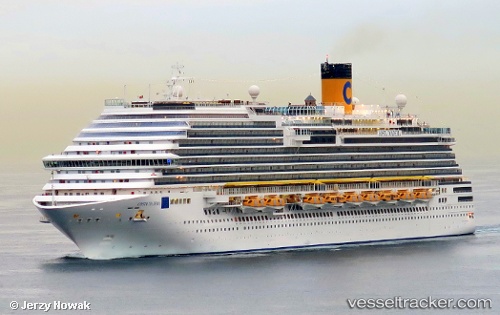 The 'Costa Diadema', moored in the port of Piombino since March 3ß, will have the support of a Covid 19 emergency hospital unit which will be built in record time on the quay, so that assistance will be offered to crew members who were tested positive for coronavirus currently on board the ship in non-serious conditions. The ship had left Dubai on March 14, with 1255 crew members on board, among them 155 Italians, and about 20 possible infected by Covid-19, including five in more serious conditions who were hospitalized since: four at the Misericordia hospital in Grosseto and one in Livorno. Their conditions have been judged stable. The 'Costa Diadema', which currently has a first aid service guaranteed directly on board, will soon be able to count on this advanced hospital facility, located a few meters from the ship: a tensile structure of 250 square meters for the management of any critical issues of people with guaranteed patient isolation, advanced resuscitation, treatment and stabilization of patients with a view to possible transfer. The advanced medical point is connected to the hospital network thanks to an ambulance in bio-containment.

The 'Costa Diadema' which had been rejected from Cyprus, Gioia Tauro and Civitavecchia, berthed in Piombino on March 30 after the mayor agreed to the docking of the ship. On board were at least two crew members with serious breathing difficulties, due to suspected coronavirus, and at least a dozen infected. The mayor of Piombino agreed to the disembarkation, after guarantees were received from the Ministry of Transport on taking care of the sick. The 'Costa Diadema' had left Dubai on March 13 for the return of the crew with a single doctor on board. The first refusal was in Cyprus. The only concession was that one of the patients, with very serious breathing difficulties, had been disembarked. The ship was also turned away from Civitavecchia where the ship was expected to return on April 5. The mayor, Ernesto Tedesco, pointed out that there were already three cruise ships at risk in the city port, one of which was the 'MSC Grandiosa' with twelve positive tested crew members.

The final destination of the 'Costa Diadema', coming from Dubai with only crew members on board, was not yet confirmed to date. The ship has 1255 people on board. 155 were of Italian nationality. 80 crew members were placed in solitary confinement as a precaution due to severe respiratory insufficiency. One of them was medevaced in Limassol. The AIS listed Civitavecchia as next port of call with an ETA as of March 28.