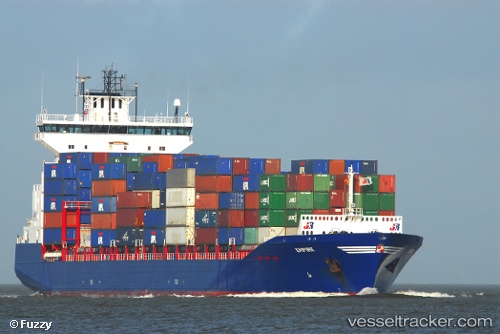 Crew member jumped over board and drowned

A crew member of the 'Empire' drowned in a bathing accident on Aug 9, 2020. The ship had dropped anchor at l/h Kiel at 1.30 p.m. during its passage frome Rauma to Hamburg. The Dutch seafarer along with a companion jumped over board to take a bath. Only the other man surfaced again. A large scale SAR operation was started involving the lifeboat 'Berlin' of the DGzRS station Laboe, Northern Helicopter, the 'Eschwege' of the Federal Police, pilot boats and police boats. Only at 3.30 p.m. the body of the man was found by divers on the bottom of the Kiel Fjord. He could not be resuscitated and was taken to the Forensic Medicine for an autopsy. The 'Empire' was ordered to berth in the Nort Port in Kiel at 11 p.m. for investigations. She left again on Aug 10 at 5.10 p.m. and berthed at the CTA in Hamburg at 8.40 p.m.

The "Empire", being enroute from Hamburg to Gdynia, on Jan 16, 2019, around 3 a.m. allided with the wall of the southern lock of the Kiel Canal in Brunsbüttel upon entering. The incident was investigated within the lock, and at 4.45 a.m. the ship was allowed to continue its eastbound voyage through the canal to Gdynia. She dropped anchor upon its arrival off the port in pos. 54° 31.21' N 018° 38.56' E on Jan 17 at 3.50 p.m. waiting for port entry where it remained stationary on Jan 18.

On Mar 19, 2016, short past midnight the "Paula Anna" was in collision with the "Empire" on the Kiel Canal at Breiholz west of Rendsburg. The "Empire“ was underway from Bremerhaven to Gdansk and was stopped on Mar 18 at 11.30 p.m. for the transit of the "Empire" on her way from Pörnu to St. Nazaire. In dense fog the "Paula Anna“ by yet unknown reasons smashed into the bow of the "Empire“. She was able to proceed to Brunsbüttel inspite of significant damage where she berthed at 5 a.m. The "Empire" berthed at the Voithkai in Kiel for investigations. She had only suffered slight damage at the starboard foreship and was allowed to continue the voyage at 11.30 a.m. The "Paula Anna" despite damage at the accomodation block sailed on around 5 p.m. German report with photo: http://forum-schiff.de/phpBB3/viewtopic.php?f=2&t=23&p=124264#p124264 http://www.ndr.de/nachrichten/schleswig-holstein/Kollision-zwischen-Frachtschiffen-auf-NOK-,kollision188.html