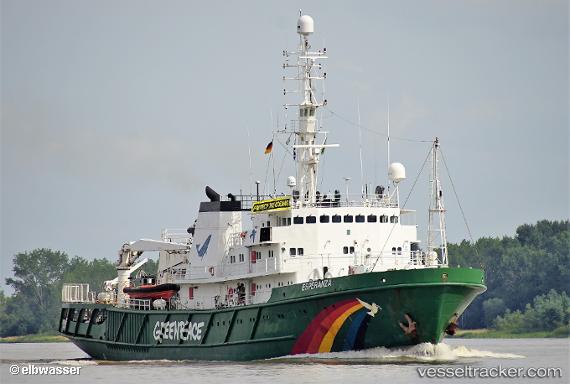 Activists on board the 'Esperanza' documented a large methane leak located in the British exclusive economic zone in the North Sea. Using a ROV, they were able to film two of the gas-e mitting craters at about 100m water depth on the seafloor at positions 57°55.30’N, 001°37.87’E and 1057°54.81’N, 001°38.72’E, which are between 50 and 15 meters in diameter and up to 20 and 9 meters deep, respectively. The leak was caused by a major blow-o ut during an oil drilling operation 30 years ago, and is still emitting methane; a gas 28 times more powerful than carbon dioxide. In 1990, the Swedish Stena Drilling Company, on behalf of Mobil North Sea (now Exxon Mobil), accidentally tapped a gas p'High Seas Driller' while searching for oil, causing a blowout that resulted in several craters on the seabed. An international team of scientists had previously been to this site and estimated in 2015 that up to 90 litres of methane per second were being released. The leaking borehole has been returned by Exxon Mobil to the British state who in 2000 determined that further monitoring was not required, believing that the reservoir would soon be depleted. But 30 years later the greenhouse gas keeps escaping into the atmosphere. According to a recent independent study, an estimated total of 8,000–30,000 tonnes of methane per year escape from gas leaks from more than 15,000 boreholes in the North Sea – adding to the 72,000 tonnes of methane that normal operations of platforms in the North Sea release every yearThe Greenpeace ships ESPERANZA and RAINBOW WARRIORare on a month-long documentation and peaceful protest tour to document the impacts the extraction of fossil fuels is making in the North Sea. Teams on board will gather evidence of the extreme industrialisation of the region by the oil and gas industry, which has been polluting the ocean, fueling the climate crisis and exacerbating inequality with its “business as usual” operation model.

Guinea Bissau, 28 March 2017 - Four fishing vessels have been arrested in Guinea Bissau waters after joint patrols by Greenpeace and the Fisheries Surveillance Department of Guinea Bissau, FISCAP, found multiple fishing infringements. The vessels were brought to port, and the crew on board as well as the owners of the vessels are now being investigated by local authorities for illegal transshipment at sea, failure to display readable names on the vessels, non-payment of fines and usage of illegal fishing equipment. Pavel Klinckhamers, project leader onboard the Greenpeace ship, the Esperanza, said: “The fact that we managed to come across such a high number of vessels breaking the law in only a few days really confirms the alarming ‘Wild-West’ situation in the waters of West Africa. Fishing companies and crews have gotten used to exploiting Guinea Bissau’s insufficiently managed waters, and our findings show that illegal operations are most likely taking place on a daily basis.” http://www.greenpeace.org/africa/en/Press-Centre-Hub/--Greenpeace-and-Guinea-Bissau-authorities-arrest-fishing-vessels/

No berth space for Espranza in Leith

The "Esperanza" which was due to launch a campaign to combat plastic pollution of the seas has been refused permission to dock in the Port of Leith. The operator, Forth Ports, has told the environmental group Greenpeace that it cannot bring the vessel in to the port this week because it is too busy. Forth Ports has offered Greenpeace an anchorage in the Firth of Forth instead. The ship is due to arrive in the Forth on Nov 9, 2016, but as yet Greenpeace says it has no permission to stay. The purpose of the visit is to support plans for a deposit and return scheme for drinks containers to cut plastic waste, and no direct action is planned.