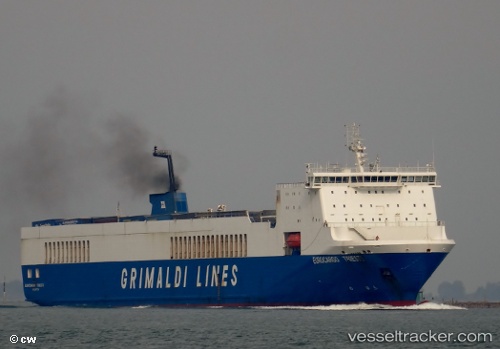 Sold to Aliaga Breakers ,under Tow of Tug Sea Buffalo

The Grimaldi Group on Nov 26 has commented the seizure of the 'Eurocargo Trieste': "With reference to the accident that occurred last week on the Eurocargo Trieste, and following the publication of some articles showing the ship's alleged failure to comply with safety standards, the Grimaldi Group wishes to specify the following. Around 02:00 am on Thursday 21 November, shortly after leaving Livorno, a fire broke out in the engine room for reasons being investigated. The ,aster of the ship promptly intervened the crew and immediately alerted the competent authorities, fire brigades and tugs. The shutdown operations ended at 12:00, without damaging the 170 trailers on board, no one among the 25 crew members was injured or intoxicated. A few hours after the incident, alleged anomalies regarding the ship's safety equipment were notified to the Company. It is important to point out that the fire was extinguished after more than 10 hours of work by the crew, the fire brigade and the nautical technical services of the port, and the plants referred to were subjected to intensive use which has obviously compromised its functionality. The anomalies raised are, therefore, the consequence of the fire itself. The Eurocargo Trieste is used on the Livorno-Savona-Barcelona-Valencia route and has registered over 250 stopovers in the last year. The ship is subjected to periodic checks by the RINA classification company, as well as external audits and inspections carried out by the port State (PSC "Paris MoU") which have regularly certified the correct application of international health and safety standards and environment. Furthermore, the most recent PSC inspection, carried out in the port of Livorno last September, did not report any ship's deficiencies in the ISM (International Safety Management Code), nor to fire-fighting vehicles. The Eurocargo Trieste ro / ro ship built in 1997 at Fincantieri on behalf of leading Spanish shipowners, was purchased in 2015 by the Malta Motorways of the Sea Ltd company and is currently chartered by Grimaldi Euromed SpA. The ship is registered with the prestigious Maltese register, in the White List according to the Paris MoU, and is managed under the technical-operational profile of the Greek ship management company Valiant Shipping. Immediately after the purchase and over the last four years, the ship underwent major upgrading works, for an amount of over 4 million euros, which further increased its quality and safety standards. The Grimaldi Group makes every effort to ensure the highest safety standards for its ships, given the worrying increase in cases of on-board fires recorded on a global scale. In addition to regulatory requirements, the Group promotes additional initiatives in terms of prevention of material and environmental damage and training with exercises both on board and on land, as well as regular internal controls regarding compliance with safety procedures." The sip berthed at the building wharf in Livorno on Dec 3. The leadership of the Grimaldi Group takes the opportunity to express its appreciation to the Italian authorities, especially the Coast Guard and the Fire Brigade of Livorno, for their prompt intervention. Finally, the Group wishes to express its profound thanks to the Commander and the crew of the Eurocargo Trieste ship, for the promptness and professionalism lavished on the management of the accident ". The ship left the port of Livorno again on Jan 8 at 8.25 p.m. and headed to Piombino as next port of call where it arrived in the morning of Jan 9. The ferry was not repaired and instead sold to breakers in Aliaga. The disabled ship was taken in tow by the tug 'Sea Buffalo' (IMO: 7719686), which had been deployed from Valletta, on May 2 in the port of Piombino. On May 6 the convoy had reached the strait of Messina with an ETA in Aliaga as of May 16. Report with photo: https://www.instagram.com/shipsofmessina_official/?utm_source=ig_embed