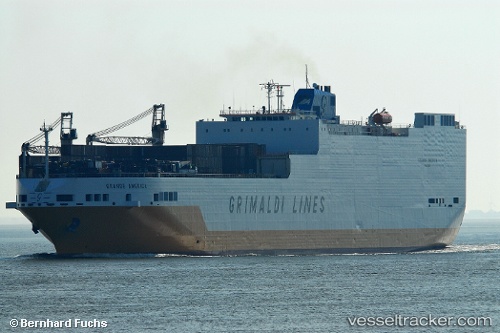 Since the discovery of hydrocarbon slabs strewn on several beaches in the Pays de la Loire on Feb 17 and 18, the maritime authorities have increased their level of vigilance using satellite means. Aerial surveillance was carried out regularly by the French Navy and Customs aircraft in the area between the French coast and the sinking site of the 'Grande America' around 180 nautical miles offshore. On Feb 21, during one of these flights, a release of heavy oil was observed in the area. Subsequent flights failed to relocate or identify a new release. The weather conditions, still degraded in the Bay of Biscay, make it difficult to detect pollutants at sea. On orders of the maritime authorities and as a preventive measure, a support vessel of the French Navy, being on maritime surveillance patrol, was currently ready to intervene if pollution slicks were detected near the coasts and if weather conditions allowed. The equipment for combating pollution at sea was provided for this purpose.

On Feb 17 and 18, 2020, oil cakes which had drifted onto beaches in the Loire and Vendée, were detected by the departmental gendarmerie. On the most affected beaches, a few tens of kilograms of pollutants were recovered, as well as several birds carrying traces of oil. The State services were mobilized and worked in close collaboration with the Center for Documentation of Research and Experimentation on Accidental Water Pollution (CEDRE) to try to determine the origin. The first CEDRE analyzes, carried out on samples taken, showed great similarities with the propulsion fuel from the 'Grande America' which sank in the Bay of Biscay on March 12, 2019. Satellite, air, nautical and terrestrial means were deployed as part of the regular surveillance of the maritime approaches. Surveillance flights were carried out vertically from the site of the Grande America sinking. No pollution at sea has been detected since the alert was triggered. Reinforced surveillance of the approaches of the Pays de la Loire was maintained. However, the weather conditions which degraded in the Bay of Biscay were making it difficult to detect pollutants at sea. In April 2019, a ROV had been deployed by the 'Island Prinde', chartered by Grimaldi, to stop the oil leaks from the wreck of the 'Grande America'. The 'Island Pride' had then checked the watertightness of the patches and made a full survey before leaving the sinking area on April 19.

The area of ​​the sinking site of the "Grande America" in the Bay of Biscay as well as the water that had been polluted was still being monitored three months after the accident. On June 14 he Maritime Commissioner of the Atlantic, Vice-Admiral Jean-Louis Lozier, pointed out that no new pollution had been reported. One of the masses which was monitored by satellite had recently arrived near the Spanish coast, but no pollution had been reported. The Spanish counterparts were warned, but they found nothing, while the possibility that oil pellets could one day soil the coast could not be finally ruled out. No polluted water has approached the coast of France for the moment, but with the time this probability will reducing. The chance of pellets to arrive was estimated to be extremely limited.