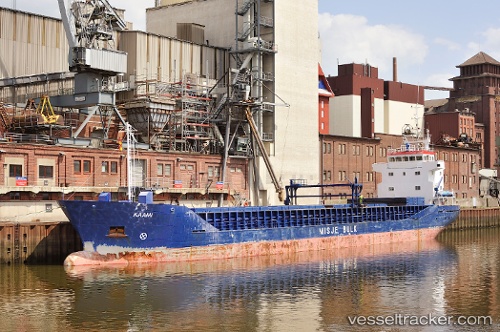 Salvors continuing to bring personnel and resources to the 'Kaami'

Salvors were continuing to bring personnel and resources to the 'Kaami', which remained high and dry on rocks known locally as Sgeir Graidach or Eugenie Rocks between the Isles of Skye and Lewis. The eight Russian crew members had been kept in isolation at a town hotel on Stornoway before seven of them returned to Kaliningrad on March 27. The chief engineer has remained in Stornoway, from where he was helping the team of salvors fromthe Resolve Marine Group. The Maritime and Coastguard Agency was supporting the salvage team of seven people, who began work on the vessel on March 25. They began removal of fuel and contaminated seawater from the tanks on March 27. The removed fuel and oily waste is to be taken to Uig in Skye for onward disposal. A series of air and sea-level surveys have been carried out by the Maritime and Coastguard Authority (MCA) to assess the condition of the vessel. Resolve’s team and other support staff have based their operation in Uig, Skye, but the resources to support the operation wree not readily available there. The operation has been made more challenging because of movement and proximity restrictions in force during the Coronavirus epidemic. On March 29 there has been activity around the vessel including from the dive vessel 'Venture', operating between Tarbert, Scalpay and Uig in Skye. The tug 'Multratug 3' was now on guard duty maintaining an exclusion zone of 500 metres around the vessel, and the Coatsguard emergency towing vessel 'Ievoli Black' was in port in Stornoway ready to take over duties when required. A detailed damage assessment established that around 28 cubic metres of diesel had escaped from the ship by March 28. The Scottish Environmental Group was aware of this and have assessed the impact of the pollution as low and non-persistent. The Maritime Accident Investigation Branch was carrying out an investigation remotely with assistance from the salvors. A fixed-wing aircraft, provided by the MCA, has been making flights over the vessel to make observations. A seabed topography survey was completed at the weekend March 28/29. The survey results will be used to accurately assess the grounding conditions of the 'Kaami' and to develop plans for removing the ship from the rocks once the cargo has been discharged. The vessel has been damaged in several places, not only by the initial impact onto the rocks, but by additional movement over two days of stormy seas immediately after the grounding. Secretary of State’s Representative Maritime Salvage and Intervention (SOSREP) Stephan Hennig has set up a Salvage Control Unit (SCU) which last met on March 27. A salvage plan is expected to be submitted by the salvors to the SOSREP for review and approval. It was expected to be some weeks before the operation to repair, refloat and tow the ship away can be successfully completed under the supervision of maritime authorities. Measures were being put in place to deal with any pollution from the ship. Drift modelling for any potential release of cargo from the ship was being carried out to assess extent and impact on the marine environment and the shoreline, though the cargo, which is described as non-hazardous and biodegradable, was currently safely in the hold. Report with photo: http://www.hebrides-news.com/cargo-ship-fast-on-reef-30320.html

The Coastguard and Highland Council have been monitoring for pollution from the 'Kaami' which remained grounded on rocks in the Minch between Skye and Lewis. About 25 cubic metres of diesel were estimated to have leaked from the ship. The pollution has been assessed as low and non-persistent. A Coastguard plane has been flying over the scene to check for further pollution. The Highland Council has been monitoring for any pollution reaching the shores of Skye and mainland Highlands. The cargo of refuse-derived fuel in pellet form, which is made from waste, was safely in the hold according to the Maritime and Coastguard Agency. A team of seven salvage specialists has been dropped off on board the ship to develop a plan for the refloating. Report with photo and video: https://www.bbc.com/news/uk-scotland-highlands-islands-52055363 https://www.youtube.com/watch?v=C2fcQ9ADK3E

The Highland Council's Emergency Planning team was aware of the grounding of the 'Kaami' in the Minch, six nautical miles north west off Duntulm on Skye where the ship remained on the rocks. The SOSREP (Secretary of State’s Representative) has been informed and is advising on the response, which was being led by the Maritime and Coastguard Agency (MCA). Salvage experts were to inspect the vessel. Given current sea conditions in the Minch, any hydrocarbons were likely to disperse and break up long before reaching the shore. Works to recover any pollution will be managed by the MCA using the national stockpile of counter pollution equipment. The MCA was responsible for ‘at-sea’ response, and the Local Authorities’ role was to manage any shoreline response, should it be necessary. The Highland Council was monitoring the situation and preparing for a shoreline response if this is necessary in the coming days.