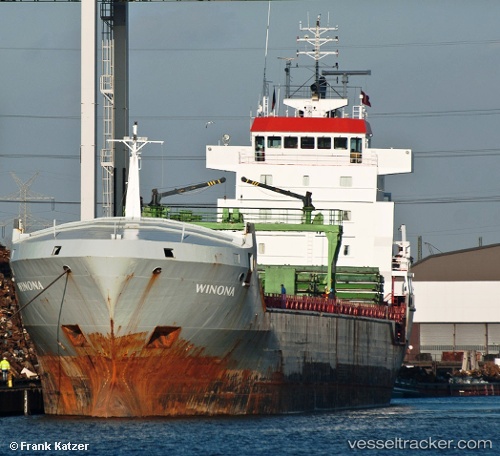 Kelly under tow to Tallinn

After the investigations aboard the 'Kelly' in Brunsbüttel have been finished, on Sep 24 at 11.30 a.m. the ship was taken in tow by the Cyprus flagged tug 'Mustang' (IMO: 9555383). The convoy was destined for Tallinn, where the repair of the fire damage was to be carried out, with an ETA as of Sep 28, 6 p.m. She left the port again after trials on Dec 5 at 7.50 p.m. and headed to Ust-Luga as first port of call, where it berthed at the bulk terminal on Dec 6 at 11 a.m. German report with photo: https://www.kn-online.de/Nachrichten/Schleswig-Holstein/Frachter-Kelly-wird-nach-Brand-zur-Reparatur-nach-Tallinn-geschleppt

One died in engine room fire

One of the three drew members who were severely injured in the engine room fire aboard the "Kelly" on the Elbe has died, one more had life threatening injuries, the third severe burn injuries. On the whole the ship had a crew of 13 on board when the fire broke out at 1.50 p.m. It was finally put out in the late afternoon. The ship remained moored off Otternorf, being secured by the tugs "Fairplay XV", "Luchs" and "Parat" and monitored by the patrol boat "Vossbrook". After it was ensured there was no more fire on board and the energy supply was restored, the anchor was raised, and the ship was towed to the South Quay in Brunsbüttel at 9 p.m. German Report with photo: https://www.ndr.de/nachrichten/niedersachsen/oldenburg_ostfriesland/Elbmuendung-Ein-Toter-bei-Feuer-auf-MS-Kelly,kelly352.html

Fire on cargo ship on the Elbe

The "Kelly" caught fire on Sep 6, 2019, around 2 p.m. on the Elbe between Otterndorf and Brunsbüttel enroute from Rotterdam to Kaliningrad. Three crew members were injured and taken off for further treatment in surrounding hospitals. The Central Command for Maritime Emergencies was coordinating the response. The fire departments from Cuxhaven and Brunsbüttel which scrambled at the Oste Barrier at Balje-Hörne, along with the fire boat "Henry Köpcke" from Stade and units of the German Life Saving Society (DLRG) were on site as well as a helicopter of the Federal Police and another of the ADAC, the DGzRS-lifeboat "Anneliese Kramer", the customs boat"Glückstadt" and several tugs such as "Parat", "Multrasalvor", "Fairplay XV" and "Viking Energy", securing the vessel which dropped anchor near the Oste estuary in pos. 53° 51.62' N 009° 2.41' E. No pollutants were spilled, and ship traffic on the Elbe remained unaffected. The fire brigade from Brunsbüttel was meanwhile stood down. Possibly the ship would be towed into the Elbe Port Brunsbüttel. German reports with photos: https://www.boyens-medien.de/artikel//elbe-vor-brunsbuettel-feuer-auf-kuestenfrachter-ausgebrochen-292507.html https://www.cnv-medien.de/news/zwischen-brunsbuettel-und-otterndorf-feuer-auf-frachter-in-der-elbe.html