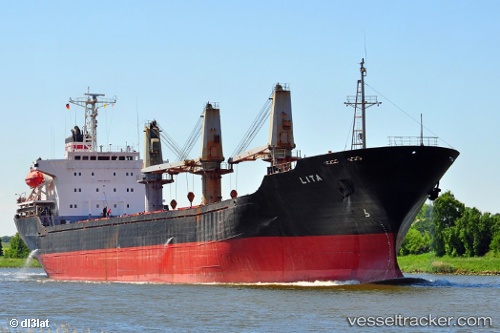 On Aug 22, 2019, at 11 a.m. the 'Lita', enroute from St. Petersburg to Antwerp, suffered engine trouble off Terneuzen on the Wester Scheldt and dropped anchor at the heigth of the Margaretha Way. The Multraship and Boluda (formerly KotugSmit) tugs 'Multratug 6', 'Multratug 28', and 'Multrasalvor' offered assistance, but the captain refused. Also the patrol boat 'RWS 79' of Rijkswaterstaat attended on site. Passing ship traffic was not hampered. The crew was able to resolve the problems without assistance, and the ship resumed the voyage at 1.30 p.m. and berthed in the Vrasen Dock at 5.40 p.m. Dutch reports with photos and video: https://www.omroepzeeland.nl/media/55190/Stilgevallen-vrachtschip-op-de-Westerschelde-bij-Terneuzen https://www.pzc.nl/zeeuws-vlaanderen/machineproblemen-bulkcarrier-bij-terneuzen-opgelost~ae7fadf9/?referrer=https://www.google.com/ https://www.transport-online.nl/site/106379/vrachtschip-lita-in-de-problemen-op-westerschelde-foto/

The "Lita" was detained by for nine days after Belgian authorities inspected the ship and found dozens of safety breaches and deficiencies relating to the working conditions of the crew with the Blumenthal’s standards failing to stack up. The Port State Control boarded the vessel at Ghent on July 1, 2019, 2019, following a complaint from one of the crew members. The inspectors found 36 deficiencies, including major defects that resulted in the detention of the vessel. Serious breaches included non-functioning emergency lighting, batteries and switches; unusable life-saving appliances; incorrectly maintained lifeboats; inadequate fire extinguishers; insufficient fire training for the crew; and issues with the general safety policy and procedures on board. The inspectors also found a number of structural problems including insufficient electrical maintenance, rust and unsafe, damaged doors. The vessel remained under detention by Port State Control Belgium until the critical deficiencies were rectified, and was released from its arrest on July 9. The "Lota" had also also the target of protests at the Port of Ghent by ITF affiliated dockers unions ACV-Transcom and BTB who delivered drinking water to the crew on board the vessel following claims that seafarers on board the ship were being forced to collect rain water with tarpaulins to survive while the vessel was off the coast of Brazil in May. The Blumenthal company has continued to ignore the ITF.

The "Lita" was detained in St. Petersburg on March 13, 2019, by the Ship Safety Center for 14 deficiencies. In restrictions of water consumption and the use of washing machines wree limited, the central heating out of order. The condition on the ship were described as pitiful in a way that the St- Petersburg Ship Safety Center detained this ship for fire doors that dod not work properly, radio communication problems, faulty electrical equipment, lacks regarding navigational safety, out-of-service rescue boats, wage problems, non-compliance with anti-pollution measures a.o. The ship was released on March 15 and sailed at 10.40 p.m., bound to Manaus, ETA Apr 6.