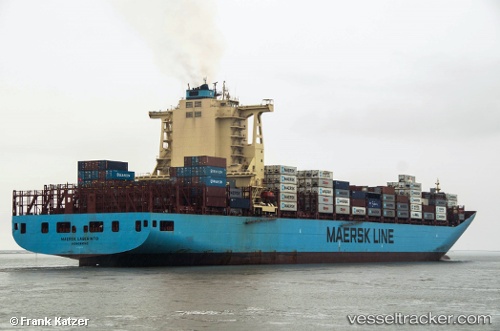 Experts have started to investigated the container gantry which was hit by the "Maersk Laberinto". The damaged 1.800 tons crane of the North Sea Terminal Bremerhaven was moved to a remote place with special vehicles. Within the next month it shall be found out whether the crane is worth repairing. Regarding the cause of the accident it was thought it was human error, a technical malfunction or a wind gust. More witnesses will have to be interrogated and data analysed. German report with photos: http://www.radiobremen.de/politik/nachrichten/containerbruecke-wird-untersucht100.html

On Feb 16 the"Maersk Laberinto" after its allision with the "Maersk Missouri" in Bremerhaven left the Strom Quay again at 2.2.5 p.m. bound for Antwerp with an ETA of Feb 17, 2 a.m. The "Maersk Missouri" followed on Feb 17 at 2 a.m. and headed towards the Weser bound for Newark with an ETA of Feb 24. Both ships had suffered only minor damage, while one of the three damaged container gantrys at the North Sea Terminal Bremerhaven (NTB) will probably have to be dismantled. Experts were discussing the further proceedings on Feb 17. It may be possible to lift the damaged gantry crane which is spanning 62,5 meters to be able to operate also at Triple E-vessels, with a mobile crane for more detailed damage assessemts. The damage was estimated to be some million Euros. None of the 30 workers which had been on site when the accident happened was injured. German report with photos and video: http://www.radiobremen.de/politik/nachrichten/millionenschaden-in-bremerhaven100.html

On Feb 15, 2014, the Honkong flagged container m/v "Maersk Laberinto", 89505 gt (IMO: 9526978) while entering the container port of Bremerhaven at 9.30 a.m. allided with the Liberian container m/v "Maersk Missouri", 50698 gt (IMO:9155121), which was already docked at the Strom Quay. The container ship was caught by strong gusts of wind and got out of control in spite of tug assistance. While both ships suffered only superficial damage, three container bridges were damaged in a way that one of them was pushed out of its rails and was in danger of collapsing. The other two gantrys were not so much affected, but also no longer functional. The area was immediately cordoned off. Engineers were currently trying to secure the crane. The "Maersk Laberinto" was hauled out of danger area and towed to another berth at the quay. The ban on the vessel was lifted after the master paid a security deposit of 10.000 Euro. Investigations have been launched by the Police Bremen. Reports with photos: http://www.presseportal.de/polizeipresse/pm/35235/2665643/pol-hb-nr-0104-nach-schiffskollision-hoher-sachschaden-an-containerbruecke-mit-fotos http://www.rp-online.de/panorama/deutschland/containerbruecke-in-bremerhaven-ist-einsturzgefaehrdet-bid-1.4039391 http://www.ndr.de/regional/niedersachsen/oldenburg/bruecke537.html