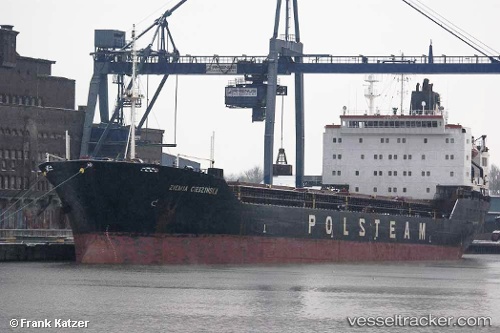 The "Maryland" was refloated in the morning of March 27 in the Kerch-Yenikalsky Canal. The salvage assisted by the Russian tug "Spasatel Demirov" (IMO: 9681443), the "Gandvik" (IMO: 8881618) and the "Nikolay Dmitriev" (IMO: 8331625) and the "Mitridad" after a partial offloading of the cargo of 20.000 tons steel. A floating crane lightered 3,000 tons of the cargo after numerous attemps to pull the ship off had failed before. After the successful salvage, the ship was taken to the Kerch Outer Anchorage and moored at 7.40 p.m. in order to be surveyed before deciding if she may resume the voyage, or has to be repaired, with all cargo getting offloaded. The vessel had run aground off Chushka on March 13 at 4.30 p.m. en route from Mariupol to Maghera. https://ru.krymr.com/a/news-sudno-maryland-selo-na-mel-kerch-buksir-gandvik/29825210.html https://kerch.fm/2019/03/15/chetyre-buksira-ne-smogli-snjat-s-meli-suhogruz-s-metallom-v-kerchenskom-prolive.html https://iz.ru/856525/2019-03-15/vyshedshii-iz-mariupolia-sukhogruz-sel-na-mel-v-kerchenskom-prolive https://ria.ru/20190314/1551806440.html https://vesti-k.ru/suxogruz-maryland-nachali-staskivat-s-meli1/

Bulkcarrier ran aground in Azov Sea

On March 13, 2019, at 4.30 p.m. the "Maryland" ran aground while transiting the northern Kerch Strait in southern direction, en route from Mariupol to Maghera with a cargo of iron. She got stuck at Chushka after veering off the fairway. Several tugs attended the casualty which did not hamper ship traffic.

The "Maryland" was in collision with the cargo m/v "Zakamsk" at Zeytinburnu Anchorage in the Marmara Sea on March 1, around 4 a.m. She sustained superficial damages, mostly scraps, while the "Zakamsk" suffered two lengthy breaches above the waterline. The bulkcarrier had arrived at the anchorage on Feb 28, waiting for the transit of the Bosphorus, being bound from Ravenna to Mariupol. She moored in pos. 40° 57.97' N 028° 55.51' E and arrived at Mariupol on March 9 at 0845 a.m. The "Zakamsk" had arrived at Istanbul on Feb 22 and was enroute from Alexanndria to Ismajil.