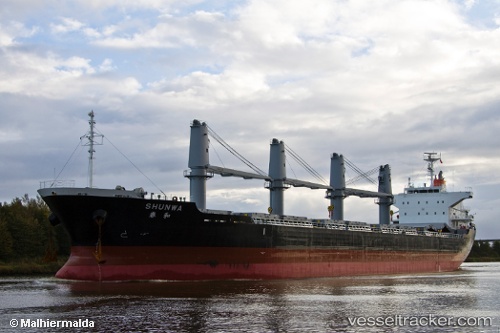 Ukraine has asked Turkey for help in investigating the three Russian-flagged vessels 'Mikhail Nenashev', 'Matros Pozynich' and 'Matros Koshka' as part of Kyiv's effort to investigate the theft of grain from Russian-occupied territory. In a letter dated June 13, 2022, Ukraine's Prosecutor General's Office asked the Turkish Ministry of Justice to investigate and provide evidence on the three named vessels it suspects. having been involved in transporting allegedly stolen grain to recently occupied Ukrainian territories, such as Kherson. The letter stated that the ships left Crimea's main grain terminal in Sevastopol in April and May and urged Ankara to obtain documents about their cargo and their arrival at Turkish ports. The ships are owned by a subsidiary of a Western-sanctioned Russian state-owned company called United Shipbuilding Corporation. If it is established that United Shipbuilding Corporation transported grain from recently occupied Ukrainian territory, this would add to the emerging evidence of the involvement of Russian state-owned entities in the export of what kyiv claims be stolen goods. Ukraine has publicly accused Moscow of stealing grain since the February invasion; Russia has repeatedly denied stealing Ukrainian grain.

The cargo m/v 'Matros Koshka', which has been blamed by the Ukraine for transporting grain stolen from Ukraine, popped up on AIS on June 9, 2022, after a 9-day period of the transmitter being switched off, which lasted from May 30. The ship’s AIS track and records confirmed the Ukrainian suspicions. Obviously, during the 9-day period of being off the radars, the ship called an unidentified port to offload cargo, most probably a Syrian port. Previous track and records confirmed another Ukrainian allegation, that the vessel, along with other bulk carriers, was involved in suspiciously looking voyages, including the 'Matros Poznych', which was covertly loaded with grain in Sevastopol, which had a gap in the Black sea sailing track and records, lasting from May 18 until May 24.

New satellite images provided by Maxar Technologies showed the 'Matros Pozynich' arriving in the port of Latakia on May 27, carrying around 30,000 tons of grain.The Russian vessel is one of three ships that have loaded grain at the port of Sevastopol in the Russian-occupied Crimea since Moscow launched its invasion of Ukraine. According to Ukrainian authorities, Russian troops stole more than 400,000 tons of grain from the occupied territories. The ÄMAtros Pozynich' was last seen in Sevastopol on May 19 and subsequently tracked transiting the Bosphorus strait and south along the Turkish coast. The ship can carry about 30,000 tons of grain. The 'Matros Pozynich''s sister ship has also loaded grain at Sevastopol in the last two weeks. Convoys of trucks have been seen carrying grain from farms and silos in the occupied parts of southern Ukraine into Crimea, the peninsula illegally annexed by Russia back in 2014. Ukrainian authorities estimated earlier in May that Russian forces in occupied areas had stolen more than 400,000 tons of grain. The grain thefts are threatening this year's harvest in Ukraine, one of the world’s most important grain-producing countries.