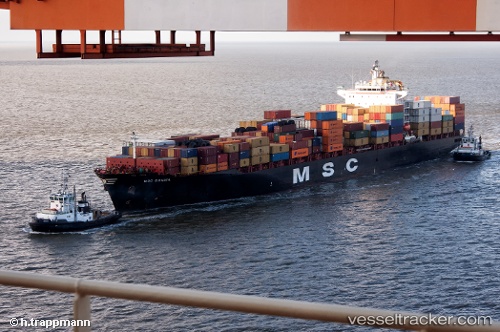 The Turkish police made a drug bust on board of the "MSC Donata" as a result of an multinational efforts to break a drug ring, which used to smuggle cocaine to Europe with container ships. The ship was boarded by the police in the Dardanelles, and brought to Ambarli, Istanbul. Bags with 212 kilos of pure cocaine were found in a container, which was transported to Spain from Brazil, and then loaded on board of a container ship bound for Turkey. The "MSC Donata" docked at Gemlik on June 14, 2017, at 4.20 a.m. She jsf transited Dardanelles on June 13 and after a short stay at Ambarli, sailed to Gemlik. Prior to the call, the vessel called three Spanish ports, Vaslencia, Castellon and Barcelona, before proceeding to Fos and Piraeus. There was no mentioning of crew suspects.

On Apr 9, 2017, at noon, the "Iapetos" was in allision with the "MSC Donata" in the port of Thessaloniki during berthing operations at the dock no. 6. SHe was coming from Heraklion with a crew of 16 and a cargo of containers on board. She bumped into the "MSC Donata" which was berthed at the quay, causing slight damage to both ships. No injuries nor marine pollution were reported. After the incident both ships were banned from sailing until surveys by the classification societies had been completed. The "MSC Donata" left the port again, bound to Izmir, on Apr 10 at 1 a.m., while the "Iapetos" was still docked at the Thessaloniki Port Authority Container Terminal.