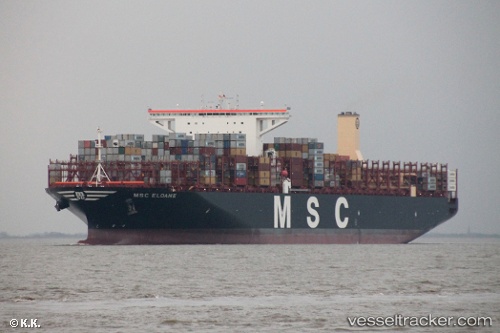 A part of the 30-45containers the "MSC Eloane" lost 40 miles of the Galician coast, continued to drift on the beaches of the Costa da Morte. On Jan 14 a group of volunteers were cleaning the beach in O Rostro (Fisterra), after wood chip packages and tobacco had gone ashore at the Muxiana beach of Nemiña. Meanwhile, the "SAR Gavia" and the patrol boat "Salvamar Altair" were involved in the recovery work in the afternoon of Jan 14 in the estuary of Corme and Laxe. Two large metal plates, part of the containers, were removed with the crane of the "SAR Gavia" and taken to the Cormelan pier in Gavia. Also in O Rostro the bottom of one of the containers remained to be removed with the help of the Concello tractor. The "MSC Eloane" left the port of Cadiz again on Jan 17 at 3.15 p.m. and headed to Tankger next, arriving there on Jan 19 at 2.25 a.m and sailing on to Valencia the same day, ETA Jan 20.

The "MSC Eloane" has between 30 and 45 40-ft-containers, about 40 miles off the Galician coast on Jan 5, 2018, around 10 p.m. 40 miles northwest of Finesterre in the appriach of the traffic separation zone in waves of up to seven meters. The ship was enroute from Rotterdam and Tanger. Salvamento Marítimo in Finisterre was notified of the loss of this cargo among which were no dangerous goods, and alerted the ships in the vicinity to navigate with caution. It was believed that some of the boxes would sink by their own weight. The maritime rescue center waited until Jan 7 to see if conditions improved and a search operation in the area could be carried out. The "MSC Eloane" which had sailed from Rotterdam on Jan 2 dropped anchor off Tanger on Jan 7 at 4.20 a.m. She entered the port of Cadiz on Jan 9 at 9 a.m.