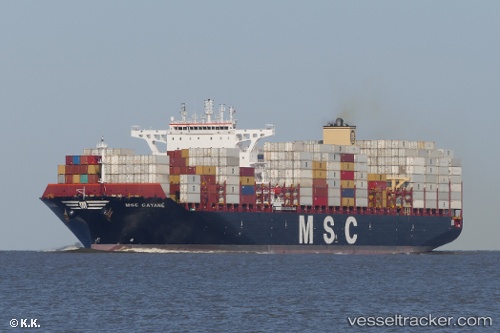 On June 17, 2019, a CBP and Homeland Security Investigations (HSI) led multi-agency team detected anomalies in seven shipping containers soard the 'MSC Gayane' in Philadelphia, and extracted 39,525 pounds of cocaine. The cocaine was said to have a street value of about $1.3 billion. On Sep 1ß0. 2020, the attorney William M. McSwain announced that Aleksandar Kavaja, 27, a national of Montenegro, pleaded guilty before the US District Court Judge Harvey Bartle III to charges of conspiracy to possess with intent to distribute 5 kilograms or more of cocaine on a vessel subject to the jurisdiction of the United States. The guilty plea was the latest development in a story that first made the headlines when, on June 17, 2019, federal, state, and local law enforcement agents boarded the containership when it arrived at the Packer Marine Terminal in Philadelphia and seized 19.76 tons of cocaine. The ship was seized and was held until the owner, a subsidiary of JP Morgan, and operator, Mediterranean Shipping Company, put up $10 million in cash and a $40 million surety bond to secure its temporary release. Another crew member, Vladimir Penda, 27, also a national of Montenegro, entered a plea of guilty to a similar charge back in June. The Department of Justice says that, in 2019, Kavaja, who worked on board the ship as electrician, conspired with others to engage in bulk cocaine smuggling. On multiple occasions during the MSC Gayane’s voyage, crew members, including Kavaja, helped load huge quantities of cocaine onto the ship from speedboats that approached under cover of darkness, traveling at high speeds. Crew members used the ship’s crane to hoist cargo nets full of packaged cocaine onto the vessel and then stashed the drugs in various shipping containers. On June 17, 2019, federal, state, and local law enforcement agents boarded the 'MSC Gayane' when it arrived at Packer Marine Terminal in the Port of Philadelphia and seized approximately 20 tons of cocaine on the ship — with a street value of over $1 billion. This was one of the largest drug seizures in U.S. history. “Mr. Kavaja’s guilty plea is the logical result from his participation in what remains a record cocaine seizure for CBP,” said Casey Durst, CBP’s Director of Field Operations in Baltimore. “Successful prosecutions reinforce the notion that suspects caught smuggling illegal drugs through our communities face severe, life-changing consequences.” Kavaja faces a maximum possible sentence of lifetime imprisonment. The case is being investigated by United States Homeland Security Investigations and the United States Customs and Border Protection, together with a multi-agency team of federal, state, and local part.

A Montenegrin crew member of the 'MSC Gayane' has pleaded guilty to charges of cocaine smuggling in connection with the giant drug seizure aboard the ship. Vladimir Penda, 27, was the fourth engineer aboard the vessel. On multiple occasions during the incident voyage, Penda helped load bulk cocaine onto the vessel from speedboats that approached under cover of darkness. Multiple crew members used the ship' crane to hoist cargo nets full of cocaine onto the vessel, then stashed the drugs in shipping containers. On June 17, 2019, law enforcement agents boarded the 'MSC Gayane' when she arrived at Packer Marine Terminal in Philadelphia. After a search, they seized about 20 tons of cocaine with a street value of over $1 billion. It was one of the largest drug seizures in U.S. history and the largest in the history of U.S. Customs and Border Protection. Given the scale of the seizure, Penda faces a maximum possible sentence of life in prison. In addition to Penda, six members of the crew - Bosco Markovic, Alekandar Kavaja, Nenad Ilic, Laauli Pulu, Fonofaavae Tiasaga and Ivan Durasevic - have been charged in connection with the smuggling scheme. The case was unprecedented, not only for its size but also for the law enforcement response. U.S. Customs and Border Protection temporarily seized the vessel - the largest it has ever taken into custody - "as being subject to possible forfeiture to the United States." The ship was later released on a $50 million bond. In addition, number-two ocean carrier MSC had its preferential American customs inspection status temporarily suspended due to the bust, which was the third involving its ships within the span of a year. MSC has not been accused of wrongdoing, and the company said in a statement at the time of the seizure that it was working with American authorities to fight trafficking.

The Swiss shipping company MSC has paid a $ 50 million bail to the US authorities to release the "MSC Gayane", which was seized with 18 tons of cocaine on board. There was no presumption that there is any correlation between the large drug victim and the shipping company, but six crew members have been arrested and charged with drug trafficking. The agreement between the MSC and the US authorities also implied that the MSC has promised to return the ship to the United States within 90 days if the US authorities requested it. Several of the arrested crew members, including the ship's second mate, have allegedly admitted that they have actively participated in the smuggling, or have been well paid for nothing to see or hear. The "MSC Gayane" was en route to Rotterdam on July 16.