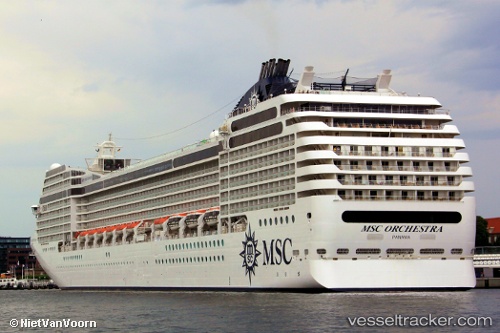 The death of a female South African crew member in the night of March 24, 2022, aboard the 'MSC Orchestra was believed to be of an accidental nature. She had suffered a severe injury, and medical staff rushed to help the crew member. She had injuries to her neck and head, and had bled to death, so they couldn’t save the crew member's life. She was working in the crew mess, and it was her first contract. The ship left Durban for a three-night voyage on March 25. Police in KwaZulu-Natal was investigating the death of the 29-year-old woman.

The Central Port Authority of Corfu was informed in the night of Sep 20, 2021, that a 79-year-old passenger of the 'MSC Orchestra', which was en route from the port of Corfu to the port of Mykonos, needed to be medevaced. The ship returned to the port of Corfu, where it disembarked the patient. He was then picked up by an ambulance and taken to the Corfu General Hospital for treatment. The cruise ship then resumed its voyage.

The SA transport and health departments were still working to find people who were on board the 'MSC Orchestra' where two people tested positive for Covid-19. This came to light on April 20 when the transport department announced that it was currently working with the department of health to trace the individuals. The 'MSC Orchestra' left the port of Durban on March 16 with 2,800 passengers and 900 crew aboard for picturesque Pomene, Mozambique — a day after President Cyril Ramaphosa announced a raft of measures to quell the spread of the coronavirus.