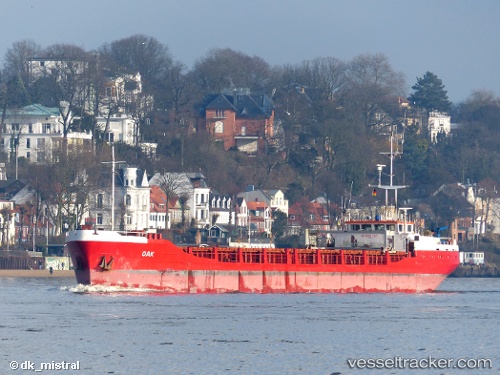 During an inspection in the Wismar seaport, officers of the water police inspection uncovered serious irregularities in ship operations regarding the handling of oil-containing waste aboard the 'Oak' on Dec 11, 2019. The ship had arrived from Riga on Dec 10. The officials came across several cubic meters of illegally stored oil-containing liquids while checking the engine room. Criminal investigations into the suspicion of an environmental crime were subsequently initiated. The public prosecutor's office in Stralsund ordered a security deposit of $ 5,200 per month from the chief engineer. In addition, the disposal of the oil-containing liquids was instructed by a competent company on site. In addition, the ship was subjected to an in-depth port state control. It left the port again after the shortcomings were remedied on Dec 13 at 5.30 p.m. and berthed in Falkenberg on Dec 14 at 6.20 p.m.

Divers called to seal the crack

After the grounding of the "Oak" on the Göta River at Lilla Edet on Jan 27 at 11 p.m. the crack which was torn into the bow was sealed by divers with wooden wedges in order to make the vessel seaworthy again. The water inside the ship, which transported a cargo of grain, was pumped out by rescue services from Lilla Edet and Stenungsund. Environmental inspectors from Lilla Edet were in place during the night to check that nothing leaked from the vessel. No crime was suspected, a technical error was thought to have caused the grounding. Swedish report with photos: https://sverigesradio.se/sida/artikel.aspx?programid=125&artikel=7143155