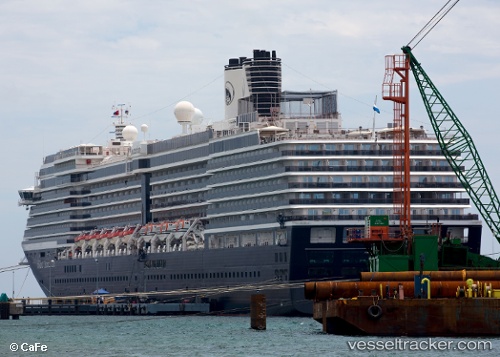 The Port Authority of Kalamata was informed eearly on July 30, 2022, that an 83-year-old passenger of the 'Oosterdam', which was sailing 48 nautical miles south of Kalamata, needed immediate hospital care. The ship sailed to the anchorage of Kalamata where the patient was transferred onto the 'Agios Nikalaos' and, escorted by a patrol boat, was safely transported to the port of Kalamata and then transported by ambulance to the General Hospital of Messinia, for further medical examination.

Crew members stuck on the 'Oosterdam' on April 28 were once again denied entry into the United States despite no confirmed cases of coronavirus onboard. She was forced to depart from the port of Los Angeles in the night with around 800 crew members from 100 countries on board after the Centers for Disease Control and Prevention (CDC) ruled against letting them disembark. The Holland America ship has been without passengers since March 14 after the United States government ordered cruise lines to suspend operations. After officials learned of a sick person who was medically evacuated, the entire crew was quarantined. As a result, the 'Oosterdam' has been stranded in international waters for around 45 days and will now be forced to sail to Ensenada for a possible disembarkation after being denied entry in LA. The HAL continued to work with the U.S. Centers for Disease Control and Prevention (CDC) to obtain approval to disembark crew in the U.S. for immediate return home under their current no sail order which does not allow them to do so at this time, including for U.S. citizens.

A sick crew member of the 'Oosterdam' was airlifted off the ship and more than 100 crew members were forced into isolation because of coronavirus fears. Two crew members criticized the communication onboard, which they say left many workers in the dark for three days about a sick colleague who was eventually removed from the ship. They have been on the ship without passengers since March 14, On April 3, the hotel director on the cruise ship told about a dozen crew members that one of their colleagues had tested positive for COVID-19, before shouting the news to about 20 others who were waiting in line to receive masks and gloves. Later that day, the two crew members had their temperatures taken by a medical worker who visited their rooms. There are 753 people on the ship, which meant the vast majority may not have learned about the sick crew member until April 6, when the captain first mentioned over the vessel's intercom system that she had been removed from the ship for medical reasons the night before. The captain added that the 'Oosterdam' has not been able to conduct accurate tests for COVID-19 due to a lack of the necessary equipment. Both crew members wer enow among the 70 or so who are isolated in their rooms after being in close contact with their colleague who tested positive for COVID-19, while the 'Oosterdam' sailed between Cabo San Lucas, Puerto Vallarta, and Los Angeles to pick up supplies. They were joined by about 35 other crew members who have been isolated with a cough, sore throat, or flu-like symptoms, the captain said in an announcement on April 8.