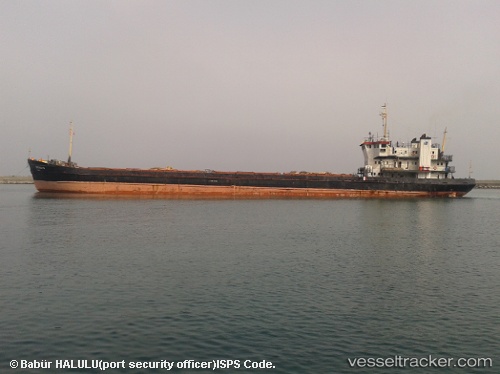 On Nov 22, 2018, at 6 a.m. the "Orel 3", coming from Kherson, was run aground in the area of ​​the central beach of Zaporozhye on the Dniepr river. The ship got stuck in pos. 47° 50.30' N 035° 5.69' E just a few meters from the shore next to the rescue station. The ship which had been loaded with a cargo of scrap metal bound to Greece had struck an obstruction while sailing downstream and was breached in the foreship area. The captain grounded the ship to avoid things getting worse. At noon the tug "BT 463" (MMSI: 272140900) went alongside to assist in dewatering the ship and tow it off. The ship arrived in Kherson on Dec 1 at 1.40 p.m. The vessel sailed on Dec 19, at 10.15 p.m., being bound to Gebze, ETA Dec 23. Russian reports with photos and video: https://zp.oblast.online/news/v-zaporozhe-barzha-sela-na-mel-okolo-tsentralnogo-plyazha/ http://zv.zp.ua/tag/orel-3/ https://korrespondent.net/city/zaporozhye/4035657-v-zaporozhe-selo-na-mel-sledovavshee-v-hretsyui-sudno https://24tv.ua/ru/v_zaporozhe_selo_na_mel_sudno_podrobnosti_incidenta_n1068027 https://www.ukrinform.ru/rubric-regions/2585225-v-zaporoze-selo-na-mel-sudno-s-metallom.html https://www.061.ua/news/2223745/v-zaporoze-suhogruz-polucil-proboinu-i-sel-na-mel https://www.segodnya.ua/regions/zaporozhye/v-zaporozhe-sela-na-mel-ogromnaya-barzha-opublikovany-foto-1191297.html

On May 9, 2017, a Port State Control was carried out aboard the "Oral 3" which was berthed with a crew of 11 in Ortona. The inspectors found a large number of shortcomings and violations in respect of the provisions of the International Conventions governing the minimum standards of security for merchant ships. Following a meticulous inspection lasting about 10 hours, the ship was arrested because the minimum requirements imposed by the International Conventions for the Protection of Naval, Marine and Marine Safety Security and anti-terrorism were not met. The ship will have to remain in port until all defincies have been found rectified during a new inspection by the inspection team of the Coast Guard. Italian report with photo: http://www.primadanoi.it/news/cronaca/572563/nave-ucraina-non-supera-ispezione-capitaneria-bloccata-al-porto-di-ortona.html

Water ingress was detected during the inspection of the "Orel 3" in the port of Thessaloniki, where she docked on Sep 16, 2016, in the morning of Sep 19, 2016. The vessel was detained.