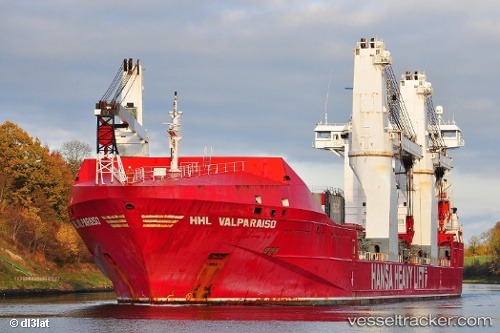 HANSA HEAVY LIFT has transported five pipe racks and three modules, weighing a total of 1,871.51 metric tonnes and measuring 24,075 m³, for a new floating production storage and offloading (FPSO) unit off the coast of Brazil. With the heaviest piece weighing 730 metric tonnes, the cargo was loaded onto the HHL Valparaiso at the ports of Itajaí and Rio de Janeiro in Brazil before being transported to Qingdao, in the Shandong Province of China, where it will undergo final outfitting before being transported back to Brazil. More to read at http://www.marineinsight.com/shipping-news/hhl-transports-giant-pipe-racks-new-fpso-unit-brazil/

August 23 – The HANSA Heavy Lift ship HHL Valparaiso left the Irish port of Fenit in County Kerry recently carrying two ship-to-shore container cranes for delivery to the USA. Bound for Elizabeth Port in New Jersey, the cranes were manufactured by the Irish division of Swiss-owned Liebherr Container Cranes in Killarney. The HHL Valparaiso is believed to be the largest ship ever to dock in the Irish port, situated just south of the Shannon estuary, since it opened for commercial business in 1887. Liebherr said a further seven such export-based calls at Fenit are scheduled for the rest of this year. http://www.heavyliftpfi.com/content/NewsItem.aspx?id=4629