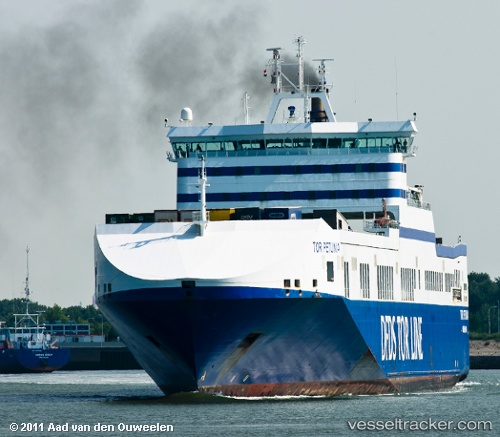 A skipper has been fined £3,000 after he set sail in his Second World War boat with just an iPad to navigate - and promptly crashed into a ferry when the wifi connection dropped. David Carlin, 34, accidentally navigated the 50ft wooden PEGGOTTY - which did not even have a compass - into the main shipping lane of the Humber Estuary during dense fog, where he collided with a cargo ferry last May. His wooden vessel, which had faulty navigation lights and radar, sunk within half an hour and Mr Carlin, a pilot with Associated British Ports, was forced to put out a Mayday call. The DFDS Seaways cargo ferry, PETUNIA SEAWAYS, was 1,400 times bigger than the PEGGOTTY and its skipper did not even realise the collision had occurred - carrying on its journey to Gothenburg in Sweden. He was also fined £3,000 by Hull magistrates for breaching maritime laws. The Sun reports Mr Carlin and his wife Hannah Bowie had been planning on selling the boat, which is a former Royal Navy training vessel, and he was sailing it from Grimsby to Hull for a survey. Mr Carlin was not on duty at the time but remains suspended from his job. Gwen Lancaster, of the Maritime & Coastguard Agency's Hull Marine Office, said: 'I am surprised this collision, which could easily have resulted in far worse consequences, occurred in the first place. 'Both vessels were under the command of experienced professional captains who should have known better.' source : Dailymail

Masters of both ships involved in collision fined

The masters of the "Peggotty" and "Petunia Seaways" that collided in the Humber during thick fog have been fined £3,000 each. The "Peggotty" sank after the collision, and the two men on board had to be rescued. David Carlin, the master of the Second World War motor launch "Peggotty" and Thomas Neilsen, master of the "Petunia Seaway", were both prosecuted after an investigation by the Maritime and Coastguard Agency (MCA). They pleaded guilty to conduct endangering ships when they appeared at Hull Magistrates Court on Feb 3, 2017. On May 19, 2016, at around 4.30 a.m. the "Peggotty", a 50 foot vessel, had left Grimsby Docks making its way to Hull. Although this was a private voyage, Mr Carlin as a professional master mariner and Humber pilot was very experienced. Despite the thick fog he failed to comply with a number of regulations to keep his and other vessels safe. These included failing to make his vessel’s radar operational, failing to make sound signals and failing to ensure all the navigation lights were working. He had also not taken the conditions into account or prepared an effective passage plan for the journey and was relying on an untested mobile phone app. At the same time, the "Petunia Seaways" was making its way down the Humber towards Grimsby. Its master Thomas Neilsen, from Denmark, was on the bridge and in charge. He allowed the vessel to proceed at 14 knots in zero visibility, without making sound signals. Mr Neilsen also failed to properly monitor and assess the ship’s radar to appreciate they were bearing down on the Peggotty. Mr Carlin on his part had not realised the "Peggotty" was in the main shipping channel and was effectively blind to the collision course his vessel was on with the "Petunia Seaways". Just before 4.50 a.m. the two vessels collided almost head on. The "Peggotty" was able to pass down the port side of the "Petunia Seaways", scraping down the side as it went. However the impact was enough to damage the hull of the "Peggotty" and it began to take on water. Mr Carlin was able to broadcast a Mayday call and the two on board were picked up by a nearby pilot boat before the "Peggotty" sank and was lost. Both masters were sentenced at Hull Magistrates Court. The district judge said that Mr Carlin for his part had a catalogue of failures, while Mr Neilsen’s actions were insufficient. As well as fining both of them £3,000 each, the district judge also ordered Mr Neilsen to pay £9,318.20 in costs as well as a £170 surcharge. Mr Carlin was told he would have to pay £6,568 costs plus the £170 surcharge. Report with photo: http://www.hulldailymail.co.uk/fines-for-ship-s-captains-after-sinking-of-peggotty-in-humber-collision-with-petunia-seaway/story-30109782-detail/story.html#MyU5jqMbRuiwHQCU.99

DFDS Mariners Tweak Engines to Save Fuel worth $255,000 per year

North European ferry operator DFDS has said in an internal newsletter that its engine room crews across the fleet are: "...all extremely focused on saving fuel by testing new and creative ideas and they are never satisfied with what they have achieved, but always looking for further improvements." By employing a number of operational tweaks, engine room staff at one of its vessels, Petunia Seaways, has reduced bunker consumption year on year for the first half of 2012, equivalent to annual savings of 179.2 metric tonnes (mt) of fuel oil and 100.8 mt of marine gas oil (MGO). DFDS estimates that this equates to annual savings of DKK 1,568,500 ($255,536) at current bunker prices.