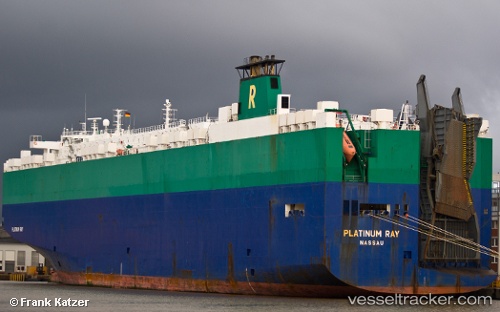 Fire on car carrier in Ulsan

A fire broke out on the "Platinum Ray" in the morning of May 22, 2019, at 10:15 a.m. while the ship was loading newly built cars at the shipment pier of the Hyundai Motors factory in Ulsan. It was bound to carry 2163 vehicles to the USA, 1643 Hyundai and 520 Kia cars, including Kona and Tucson, on the decsk 1 to 5. Within four minutes of the alert, the fire brigade mobilized 26 units including pump vehicles and 103 firefighters. Three firefighters and one crew who knew the structure of the ship, a total of four, were scattered to both the bow and stern, and began to descend to the lower floor, which was believed to be the ignition point. They were not able to use the large passageway because they were worried that oxygen would enter the space. Firemen with hoses moved down through hatches that were smaller in size than manhole covers. The cargo deck was filled with smoke and dark with no visibility. When they reached the third deck , a hot spot was detected. Fire crews checked the steel floor with a thermal camera. The temperature was 90 degrees. The first and second decks below were hotter. It was judged that firefighters would have difficulties to enter. The firefighters decided to use the carbon dioxide fire extinguishing system of the ship. After evacuating all personnel on the first and second deck, all connecting doors were closed and sealed. At 12.50 p.m. the system was activated on the decks 1 and 2. The fire began to lose strength. After that, the fire brigade entered the affected decks and extinguished all the remaining fires with hoses. At 3:20 p.m., after five hours, the fire was finally put out. 30 cars on the first deck and 31 cars on the second deck were destroyed, but 2.102 cars were saved from destruction. Thanks to the carbon dioxide fire extinguishing facility, it was possible to shorten the suppression time and prevent further damage. Three people were treated for smoke inhalation, and one of the firefighters was injured and moved to the hospital. The whole cargo was to be unloaded again and checked for damage. Koran report with photos: http://news.chosun.com/site/data/html_dir/2019/05/26/2019052600310.html https://www.mk.co.kr/news/society/view/2019/05/339177/ https://www.instiz.net/pt?no=6131765&page=1&category=1

The "Platinum Bay", being loaded with 500 vehicles, ran aground on March 7, 2016, at 10 a.m. while approaching Buenaventura. She got stuck less than a mile off the city’s seaside being en route from Yokohama to Buenaventura. It was refloated about seven hours later with the help of two tugs and was under way to port at 5 p.m. At 6.30 p.m. she berthed at the SPRBUN Container Terminal. A navigational error was said to be the cause of grounding.