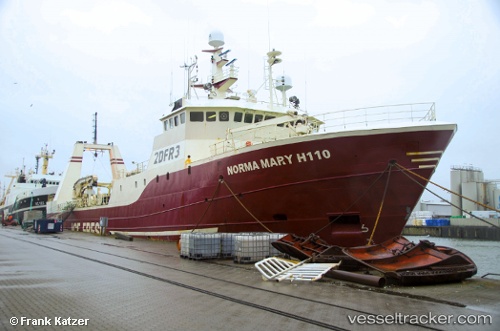 On July 14, 2019, at 10.40 p.m. a fire broke out aboard the "Norma Mary" west of Ålesund, 30 miles off Fosnavåg.. The fire was accompanied by heavy smoke development from the fishing factory on board. Several vessels in the vicinity and a rescue helicopter from Florø were sent to assist. It hoisted smoke divers of the fire department's RITS group on board. A few hours later the fire was under control. None of the 22 crew members on board were injured. The trawler headed to Ålesund towed by the lifeboat ‘Klaveness Marine‘ and berthed in port on July 15 at 2.30 a.m. The trawler saile again on July 18 at 6.40 p.m. and berthed in the New Fishing Port of Cuxhaven on July 20 at 7.20 p.m. It sailed again on Aug 1 at 4.50 p.m. and then headed to the shipyard Stocznia Gdańsk Spółka Akcyjna. It arrived in Gdansk on Aug 3 at 9.45 a.m. The trawler left the yard again on Feb 5, 2020, at 10.15 a.m. The ship next headed to Cuxhaven via Aarhus and berthed in its fishing port on Feb 9 at 11.30 p.m. Th trawler left the port of Cuxhaven on Feb 18 at 1.30 p.m. towards fishing grounds in the Norwegian Sea. Norwegian report with photo: https://www.smp.no/nyheter/2019/07/15/R%C3%B8ykutvikling-p%C3%A5-tr%C3%A5ler-utenfor-%C3%85lesund-19488581.ece

On Oct 11, 2015, at 11.30 p.m. a fire broke out aboard the "Norma Mary" in the Barents Sea, 250 miles off the Finnmark coast. Two rescue helicopters were dispatched from Svalbard towards the ship wich was about 300 nautical miles away from Longyearbyen. The fire was isolated to the trawler's freezing rooms and extinguished by the crew of 19. Smoke divers were winched aboard the ship who found no more fire but significant damage. They made sure the fire was extinguished and that it would not flare up again. The Russian Trawlers "Vega" and "LL Tezey" quit fishing and headed towards the ship. On Oct 12 at 6 a.m. the patrol boat "Sortland" reached the casualty. There was still a lot of smoke, and the ship took in some water, so it was put a pump on board. The situation was, however, under control and the trawler heading towards Akureyri. Its fish processing facilities were totally destroyed. Norwegian reports with photos and video: http://www.vol.no/nyheter/2015/10/29/18-%C3%A5ringer-tilbake-p%C3%A5-Sortland-etter-brannslukking-til-havs-11745049.ece. http://www.nordlys.no/fiskerne-gjorde-store-oyne-da-kai-roger-17-tok-av-seg-roykdykkerhjelmen/s/5-34-276425 http://svalbardposten.no/index.php?page=vis_nyhet&NyhetID=6436 http://fiskeribladetfiskaren.no/nyheter/?artikkel=43189 http://www.nrk.no/finnmark/traler-brant-i-barentshavet-_-19-personer-om-bord-1.12598066 http://svalbardposten.no/index.php?NyhetID=6434&page=vis_nyhet

Since Feb 8, 2014, the "Norma Mary" was drydocked at the Bremerhaven Dock GmbH (Bredo) due to maintenance. On Feb 17 the ship was pulled out of the dock with the two tugs "Bremerhaven" and "Grohn" because it encountered engine problems which were due to be fixed within the next days. The ship was berthed in the Labrador Port for the repairs. German report with photo: http://www.nwzonline.de/bremerhaven/zwangspause-fuer-fischtrawler_a_13,5,3417067710.html