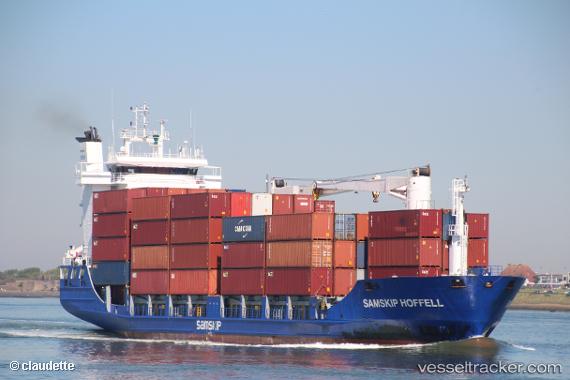 The "Samskip Hoffell" sustained a blackout due to a actuator fault on Feb 5, 2018, at 4.52 p.m. in position lat 58 50N, long 03 41W, nine nautical miles west of Orkney. The crew restarted the engine manually and resumed the voyage sailing at a reduced speed. The vessel was escorted by the AHTS "Levoli Black" from west to east through the Pentland Firth. The defect was to be repaired in Rotterdam. The master was confident that the vessel could make way without further intervention. The vessel had 1681 MRT of containers, 293.7 MRT of bunkers and 1400 litres of lube oil on board. It was en route from Reydarfjordur to Rotterdam, with a crew of 14 on board. She berthed at Frigocare Rotterdam on Feb 9 at 6.20 p.m.

Spare parts to be flown to Eskifjordur

Engine repairs to the "Samskip Hoffell" were ongoing but spare parts were required to be flown in to Iceland for the repairs. It was not expected that the vessel would depart from Eskifjordur, where it was still moored alongside, during the course of this week.

On Jan 7, 2018, at 6 p.m. the "Samskip Hoffell", having sailed from Akureyri on Jan 6, lost its power near Reydharfjordur. The vessel sent a distress signal, and rescue ships were asked to attend immediately. Around 9 p.m. the ship regained power and proceeded towards Reydharfjordur, escorted by the rescue ships. On Jan 11 at 5.30 a.m. the vessel berthed at Eskifjordur.