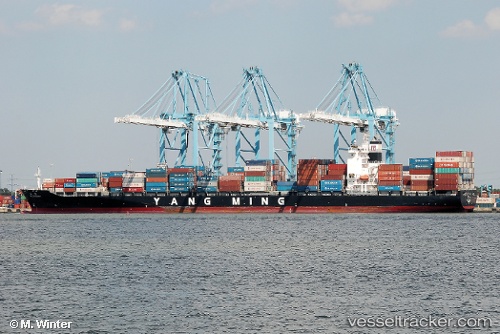 The Australian Maritime Safety Authority (AMSA) continued to press the owner of the 'YM Efficiency' to pay the $11 million cleanup costs after 63 lost containers have been plucked from the bottom of the Tasman Sea after more than 80 were lost from Yang Ming's containership 20 miles from shore in June 2018. The AMSA stepped in to handle the cleanup operations after the Taiwanese shipowner and its insurer Britannia P&I refused to take responsibility for retrieving the containers and associated debris that had scattered for miles along Australia's east coast. In December 2019 AMSA hired Ardent Oceania to perform the salvage work, which began April 3 and concluded on May 8. With the subsea recovery work now completed, AMSA intendrf to recover all associated costs from Yang Ming and its insurers. To retrieve the lost cargo, Ardent utilized the 130-meter offshore supply vessel 'Pride' equipped with a 250-metric-ton active heave-compensating subsea crane and a 35-metric-ton auxiliary crane. The vessel lowered a custom-built steel basket to the seafloor where remotely operated underwater vehicles (ROV) helped to transfer the containers and associated debris to be loaded onto the ship. Over a five-week period, the vessel made four trips to port to discharge the recovered containers for processing at a specially constructed facility within the Port of Newcastle and recycled when possible. Zhe final six containers are now being processed. The salvage was done in 35 days, including 7.5 days of delay for weather. The total cost to find, collect and dispose of the 63 containers and debris is about AUD$17 million (US$11 million), and work to locate and recover the remaining missing containers could require another AUD$5 million (US$3.2 million). AMSA said the efforts will be paid for by levies collected from the shipping industry if it’s not reimbursed by the shipowner. The attempts to engage with Yang Ming regarding their responsibility to remove the lost containers and their contents have been unsuccessful so far. AMSA will continue legal proceedings in Federal Court in an attempt to recover all costs associated with the recovery operation from Yang Ming and their insurers. In February, one of Yang Ming's ships, the 'YM Eternity', was arrested at Port Botany after AMSA petitioned the court to recover the outstanding debt. The same vessel had also been detained by AMSA in July 2019 in Sydney for the same failure to safely stow and secure cargo that led to the 'YM Efficiency' container spill. Report with photos: https://www.marinelink.com/news/australia-pressing-yang-ming-pay-478513

63 sunken containers have been recovered which were lost from the 'YM Efficiency' in rough seas off Newcastle in NSW enroute from Taiwan to Sydney when it was hit by huge seas off Port Stephens in June 2018. It lost 81 containers overboard and a further 62 were damaged. The Australian Maritime Safety Authority has since then been leading an operation to search for and recover the lost containers. The recovery operation was completed on May 8 after 63 shipping containers and tonnes of associated pollution were removed from the ocean floor. The operation involved a custom-built steel basket that was lowered on to the ocean floor, with ROVs helping to transfer the containers and rubbish into the basket to be brought to the surface and transferred to a ship. The team had originally expected to recover 60 containers but had found and removed an additional three. AMSA said the total cost of removal and disposal was about $17 million which has so far been funded by the agency. The maritime authority has commenced legal proceedings in the Federal Court to recover all costs associated with the recovery operation from the Taiwanese shipping company Yang Ming and its insurers. In the months after the incident, substantial debris from the lost containers washed ashore along the NSW coast. Fishing trawlers's nets hooked on to containers or other lost material. An Australian Transport Safety Bureau report earlier this year found shipping containers weren't stowed correctly on board the vessel.

During pre-lift surveillance of one of the container sites where the 'YM Efficiency' suffered a cargo loss, an additional two containers were identified for recovery which were previously unaccounted for on April 8, 2020. This site was previously believed to contain two containers joined together but with the better cameras aboard the 'Pride'’s ROV, it was discovered there were actually four containers at this site. The finding meant the number of shipping containers being salvaged as part of Operation Recovery – YM EFFICIENCY, now total 62 , and there are only 14 containers yet to be located. Two more containers lost by the 'YM Effiency' have been recovered and were stowed on the deck of the 'Pride'. The boxes were believed to contain tyres and paper products. Vessel movement caused some delays to sea lifts overnight and improvements to handling arrangements were underway to improve the speed and safety of handling the recovery basket. To date, three containers have been retrieved since April 6, and there were 59 containers still to be recovered. Reports with photos: https://tn.com.ar/autos/lo-ultimo/reflotan-un-contenedor-el-fondo-del-mar-y-descubren-dos-chevrlet-silverado-0-km_1063385 https://www.latercera.com/mtonline/noticia/sirven-o-no-rescatan-dos-silverado-heavy-duty-caidas-al-mar-en-un-container-hace-22-meses/FHKHC6AKXRBLLABQ6CA2QVRDOI/