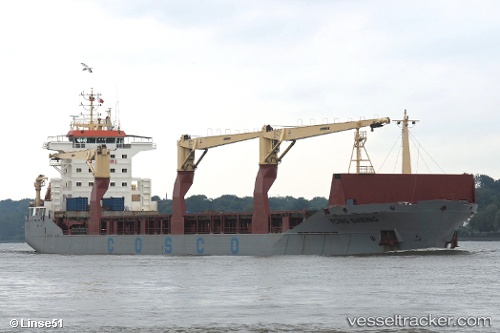 China will send more ships flying its flag to take the Northwest Passage via the Arctic Ocean to cut travel times between the Atlantic and Pacific oceans, says the state news agency Xinhua. The world's largest maritime carrier China COSCO Shipping Corporation will send more cargo vessels on Arctic voyages through the Northeast Passage. COSCO's freighter Yong Sheng set out Saturday in northern port city of Tianjin for Britain. The ship will travel through the Arctic Ocean shipping route for the third time following voyages in 2015 and 2013, when it became China's first commercial vessel to explore the Northeast Passage. At least two more huge freighters will travel on the route in August in separate voyages, said the company. http://www.marinelink.com/news/chinese-arctic-ships412668.aspx

China’s biggest shipping company intends to launch regular services through the Arctic Ocean to Europe, a spokeswoman said Tuesday, as global warming makes the route viable and Beijing steps up its northerly economic ambitions. State-owned industry giant COSCO has only twice sent a vessel through the Northeast Passage, once in 2013 and again this year. In July, subsidiary COSCO Container Lines said ship that conducted both voyages, the ice-strengthened M.V. Yong Sheng, took 27 days to cover the 7,800 nautical miles from the port of Taicang, near Shanghai, to Rotterdam. This was nine days faster and 2,800 nautical miles less than the usual route through the Indian Ocean and Suez Canal. “Enormous expenditures on fuel, canal transit, security guard, personnel and vessel wear and tear can be saved,” it said at that time. “Cost-friendly routes will be extremely significant to COSCO Group in the current difficulties of (the) global maritime industry.” The European Union is China’s biggest trading partner. “There is an intention to open a regular line in the future and people are discussing it,” a spokeswoman for COSCO Container Lines said Wednesday, without giving a specific timetable. Her comments came after the state-run Xinhua News Agency reported Monday that Chinese experts and officials had hailed the route as a “golden waterway” for trade. COSCO released a statement saying the company would “continue to promote normalization of operations for the Arctic’s Northeast Passage.” http://www.japantimes.co.jp/news/2015/10/27/asia-pacific/cosco-announces-arctic-shipping-route-europe/#.Vi8yQH7Ra9I

As one of its cargo ships arrives in Sweden after the transcontinental voyage, shipping company Cosco says it might boost shipments along the Arctic route. Questions are raised about profitability and competitiveness, but Cosco still confirms that it is interested in shipping along the Northern Sea Route. A company representative this week said that Cosco is “assessing the possibilities for more regular shipping between Europe and Asia along the NSR.” “We are optimistic with regard to the future of Arctic shipping,” the spokesman said, newspaper Hovudstadsbladet reports. The Cosco representatives spoke in Helsinki in connection with the arrival in Varberg, Sweden of the cargo vessel Yong Sheng. The ship departed from the Chinese port of Dalian on July 8 and arrived in Sweden on Aug. 17. https://www.adn.com/article/20150820/chinese-company-mulls-more-arctic-shipping