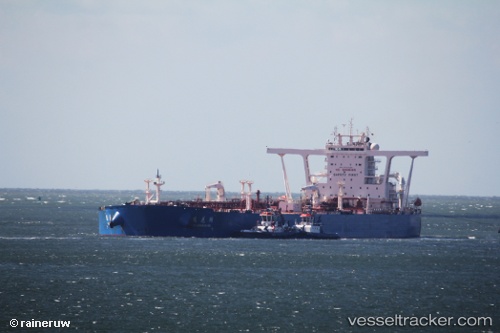 Tanker under repair in Durban

The 'Yuan Hua Hu', while enroute from Ju'aymah, encountered technical trouble in position 33 05 22S, 029 30 28E, northeast of Port Elizabeth, on May 25, 2020. The ship was taken in tow to St Johns, where it arrived under tow on May 27. On June 2 it berthed at the New Pier Container Terminal in Durban for repairs where it remained as of July 31.

In the morning of May 31, the powerful tug 'Pacific Dolphin' reached the 'Yuan Yua Hu' and pulled the supertanker out to sea with a good distance to the rocky coast. The tug was now en route to Durban with the 'Yuan Hua Hu' in tow, accompanied by the 'Smit Siyanda'. The convoy was expected to arrive in Durban on June 3. Report with video: https://maritimedanmark.dk/?Id=43671

Tanker secured for the time being

Emergency rescue and oil spill response teams were on standby after the 'Yuan Hua Hu' ran into trouble near Port St Johns on the Eastern Cape coastline. The SA Maritime Safety Authority (Samsa) said on May 28 there was no immediate risk to the safety of the crew, the ship or marine environment as the standby salvage tug ''SMIT Syanda' from Durban now had the oil tanker under static tow. The tanker had its bow anchor line deployed to the sea bed while its stern was secured by cable to the African Marine Solutions (Amsol) salvage vessel to ensure that that it was not blown ashore or swung around by swells or wind. Though the 'SMIT Siyanda' had the tanker secured for now, a much larger emergeny tug, the 'Pacific Dolphin', had been deployed from Cape Town and was due to arrive at the scene early on May 30. The 'SMIT Siyanda' had 90 tonnes of bollard pull, the 'Pacific Dolphin' is rated for 220 tonnes. The tanker and its 27-strong crew were currently floating in 35 metres of water. However, if for any reason the tanker broke free and ran towards shore before the arrival of the 'Pacific Dolphin', the rescue/salvage crew would flood the ship’s ballast tanks with water as an emergency measure. If this happened, it meant that the ballast tanks could be emptied of water, thereby allowing the vessel to be lifted and floated off rocks or the beach more easily at a later stage. The tanker carrying about 4,000 tonnes of bunker fuel. As a result, an oil spill response company went on standby in Port Elizabeth, while a helicopter team from Cape Town can also reach the scene within six hours. National Sea Rescue Institute (NSRI) crews in Durban, Port Edward, Shelly Beach, East London and Port St Johns have been placed on alert, along with the Transnet National Ports Authority helicopter in Durban. The department of forestry, fisheries and environment placed their tier 1 oil pollution response team and a Smit International salvage team on alert, ready to deploy from Cape Town The vessel had suffered damage to engine shaft seals and because this damage could not be repaired at sea, it would be necessary to tow it to Durban.