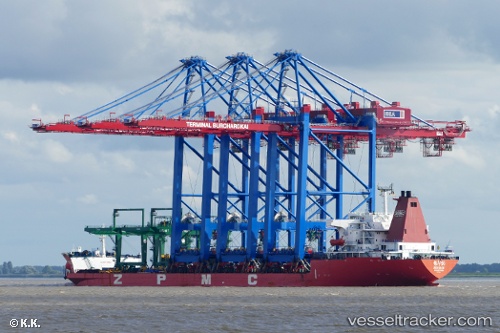 The Chinese ZHEN HUA 20 arrived on Oct. 16 under tow of the tug DE ZHOU in the port of Cape Town, the ZHEN HUA 20 encoutered an engine failure on Oct 4 off the South African western coast whilst en route from Hong Kong to La Plata, Argentina.

The 13th Chinese escort taskforce received a letter of thanks on Jan 6, 2013 from the "Zhen Hua 20" saying that "thanks to the accompanying escort by the special operation members, we were able to pull safely out of a dangerous sea area. We want to thank the officers and men of the Chinese naval escort taskforce for helping us spend a safe and memorable New Year holiday". It was learned that the "Zhen Hua 20" had been planning to sail from the Suez Canal towards Dammam Port. Considering the relatively low freeboard of the ship as well as the frequent piracy activities in the waters, the escort taskforce decided to dispatch special operation members to provide accompanying escort. Four special operation members boarded the "Zhen Hua 20" in the Red Sea. They discovered suspected pirate speedboats cruising in small groups around the ship on the evening of January 1 and immediately entered into combat deployment, successfully repelling the speedboats. For the next few days, however, several groups of suspicious speedboats in two and three at least, or in seven and eight at most, tailed the merchant ship. Every threat was dismissed thanks to the proper handling by the special operation members. After being escorted for five days, the "Zhen Hua 20" finally arrived at its destination on Jan 13.