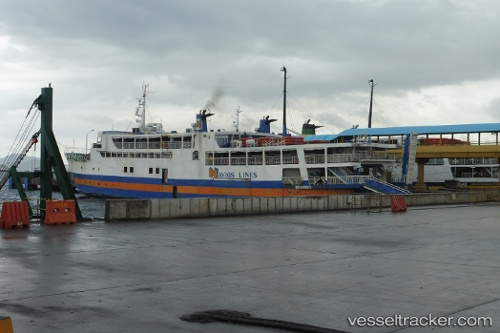 A ro/ro ferry bound from Calapan to Batangas, Luzon caught fire late on Thursday night, injuring eight and forcing the evacuation of the ship. The crew of the ro/ro Reina Hosanna discovered the fire at about 2330 hours when they were off of Matoco Point, near the entrance to Batangas' harbor. The bridge team put out a distress signal that was received by Philippine Coast Guard Station Southern Tagalog. Coast Guard responders rescued 50 passengers from the vessel, and another ferry carried the remainder of the passengers and crew safely to shore. The injured were taken to a hospital in Batangas, while the remaining 80 passengers and 26 crewmembers were brought to a Coast Guard station nearby. The ferry Reina de Luna towed the Reina Hosanna to Batangas and the fire was reportedly under control by early morning. The blaze is believed to have originated in the engine room; the cause of the blaze has not yet been determined, and authorities have opened an investigation. http://maritime-executive.com/article/eight-injured-in-fire-on-philippine-ferry

A major Taiwan shipping line has added the Batangas Container Terminal (BCT) to its cargo network, the terminal’s operator Asian Terminals, Inc. (ATI) said. Evergreen Marine Corp. (EMC) has added Batangas as a port of call to its Northeast Asia-Southeast Asia “A” (NSA) freight service. “NSA covers Batangas-Manila-Kaohsiung (in Taiwan)-Nansha-Hong Kong-Shekou (all three in Southern China)-Osaka-Kobe-Iwakuni-Moji-Hakata (the last three in southern Japan)- Taipei-Taichung-Kaohsiung and docks at BCT on Tuesdays,” the port operator said in a statement on Friday. The MV Uni-Premier recently made its maiden call at Batangas port to officially commence EMC’s weekly service. Currently, BCT has four regular weekly services and one fortnightly service connecting Calabarzon shippers directly to Hong Kong, China, Japan, Taiwan, Singapore, Indonesia and other key regional and global markets with the addition of EMC to its port rotation. BCT facilitated the delivery of over 132,000 TEUs (twenty-foot equivalent units) of international cargoes last year, up by 32%, for its highest annual throughput since starting operation in 2010. Source: BW Online