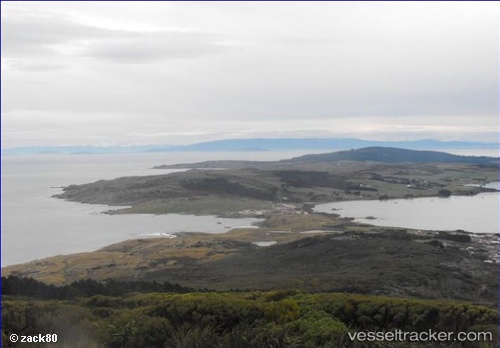 January 12 2017 - A French cruise ship docked in port at Bluff could herald the beginning of some unique cruise ship tourism in Southland. One of luxury cruise company Ponant's yachts, L'Austral, is in port at Bluff after suffering "an issue" at sea, while on its way to the Sub Antarctic Islands. ​Venture Southland tourism team leader Warrick Low said he found out about 4pm on Wednesday the ship would be arriving on Thursday afternoon, where the 200 passengers would spend the night on the ship and disembark on Friday morning. The cruise is expected to resume its normal plan of passage to the islands on Saturday morning. http://www.stuff.co.nz/travel/88364264/unexpected-cruise-ship-at-bluff-could-signal-future-tourism-opportunities

A second German-made Liebherr LHM 550 mobile harbour crane is in operation at New Zealand's most southerly box port, joining another that's been in service since 2010, reports the Otago Daily Times, serving the Dunedin area on New Zealand's South Island. South Port NZ Ltd (South Port), located at Bluff, will be used for container handling for Mediterranean Shipping Co, the harbour's biggest customer. "Six or seven years ago we were handling 8,000-10,000 TEU annually. Last financial year that was up to 32,000 TEU and we are expecting that to increase again in the next 12 months," said South Port cargo chief Geoff Finnerty