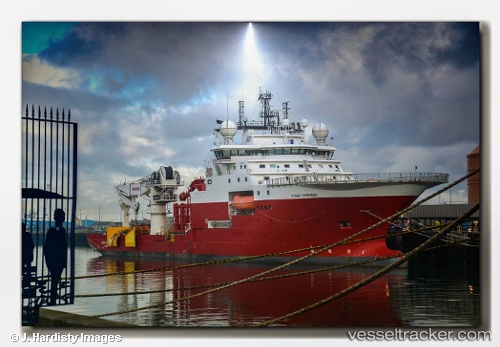 Albatross - The largest ship to visit the harbour in the history

26-02-2018 - Blyth awoke to a new feature on its skyline one morning in late February as a mammoth offshore energy vessel slipped into the Port of Blyth at sunrise. Officially the largest ship to visit the harbour in the history of the Port, the Norwegian owned Albatross is a 34,700 tonne heavy transport vessel typically used to move huge pieces of equipment and even other vessels. The 204 metre Albatross is in Blyth as part of a project led by international offshore support company Gulf Marine Services and is carrying GMS Evolution, a 6366 tonne light displacement jack up barge that will be supporting the installation of offshore wind turbines. Martin Lawlor, Chief Executive of Port of Blyth, said: “Receiving the Albatross and the GMS Evolution is another milestone achieved in an exciting few months for the Port of Blyth. New client Gulf Marine Services will now proceed with a number of important works on GMS Evolution and its sister vessel GMS Endeavour, which is already in the Port, at our South Harbour terminal and we’re looking forward to supporting those works.”

The Global Marine Group (GMG), a market leader in offshore engineering services to the renewables, telecommunications and oil & gas industries, has announced that it has expanded its operations base in the United Kingdom to include the Port of Blyth. The company has said it sees Blyth as a modern, well-specified port that has emerged as a major support base for UK offshore energy projects. Operating from the Port of Blyth, both of Global Marine Group’s two business units, CWind, which provides services to the offshore wind industry, and Global Marine, which provides fibre optic cable solutions to multiple sectors, will be able to offer regionally-focused support, resulting in faster mobilisation, greater flexibility and enhanced response times for customers. The expansion to the Port of Blyth is the latest step in GMG’s plan for continued growth and the development of a suite of local operational hubs situated where customers need support. According to the company, Blyth will enable GMG access to a wider market in the Greater North Sea, as well as further afield in Europe, where a large offshore wind customer base already exists.

Renewables Festival at Blyth Quayside August 14th & 15th 2010 (06/08/10) Port of Blyth to host major Renewable Energy Festival over the weekend of 14th and 15th August 2010. Centred around Blyth Quayside, attractions include one of the world's largest tallships, the vessel "Mir".