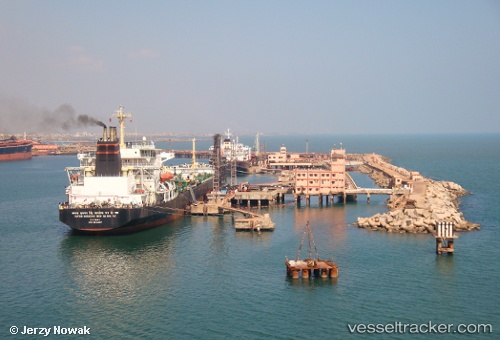 Indian Oil Corp has issued a tender for short-term commercial lease of its liquefied natural gas (LNG) storage tank at Ennore terminal near Chennai, according to a notice posted on the company website. The company is seeking bids for the short-term lease for LNG unloading, storage and reloading services at the 5 million-tonnes-per-annum (mtpa) import facility which was commissioned earlier this year. The contract period is for two years from the date of the agreement execution, according to the document.

Large crude carrier to dock at port - First time for an Indian port in an enclosed harbour.

The Chennai Port saw berthing of a very large crude carrier (VLCC) on Friday, the first time for an Indian port in an enclosed harbour. The vessel, MT New Diamond, with 1,60,079 gross registered tonnage (the ship’s internal volume), arrived from the Basra oil terminal in Iraq, carrying 1,33,719 tonnes of light crude oil on Thursday night. The vessel berthed in the oil docks of the Chennai Port on Friday. Port officials said the vessel had been chartered by Indian Oil Corporation Ltd (IOCL) for Chennai Petroleum Corporation Ltd (CPCL), which will refine the crude into products and supply them to the oil company. CPCL has its refinery at Manali, from which petro products are supplied to the three State-run oil companies. Officials said it would be a challenge to handle such a huge vessel. High-powered tugs and pilots would be used to safely navigate and berth the vessel. At present, the Chennai Port handles Suezmax oil tankers (mid-sized cargo vessels), with a capacity of 1,50,000 dead weight tonnage (DWT).

Chennai Port, located strategically between Singapore and Fujairah, the world’s first and second largest bunker fuel suppliers, has plans to make the south Indian city a bunker capital on the East coast. Efforts are underway to construct a dedicated bunker berth inside the port to accommodate bunker tankers, a move which is expected to swell the port’s revenues. Fuel used to run a ship is referred as bunker fuel and world over, supply of bunker fuel is one of the major revenue sources for ports. While ships require heavy oil to run their engines, diesel oil is used to run generators and smaller machinery. A senior official at the Chennai Port Trust told TOI that a final agreement is to be signed in the coming week to construct a 181m long berth at a cost of ?44 crore at Bharati dock to accommodate bunker ships. “The port has been supplying bunker fuels to ships in the anchorage area outside the port for the past two years, a practice which wasn’t of the port’s 136-year-old history,” a port official said. The port will be able to meet a target bunker sales of up to 1MTPA (metric ton per annum), an official said. “Singapore and Fujairah have bunker sales of 45MTPA and 25MTPA respectively. Low prices of crude oil and better infrastructure are an advantage for them,” the official added.