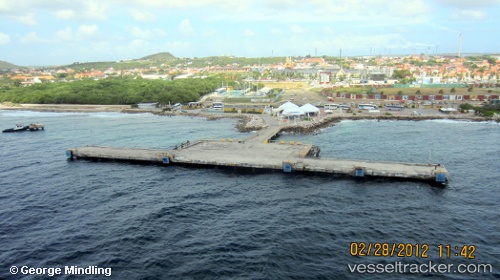 Damen Shiprepair Curaçao (DSCu), has on 2 November commissioned its large floating C dock. After the final tests had been carried out in the morning, the C Dock was submerged onto the equalized seabed. DSCu Nautical department, with the help of local KTK pilots and tugs subsequently docked the first commercial ship, a 63,400 tonnes deadweight bulkcarrier, thus putting the C dock into service.

Kalmar, part of Cargotec has signed a contract for supplying two Kalmar Ship-to-Shore (STS) cranes, including related spare parts, to Curaçao Port Services B.V. The Panamax size cranes will be used for modernising the customer’s container handling operations at the Willemstad Container Terminal in Curaçao.

The 335,000-barrel-per-day Isla refinery operated by Venezuela’s state-run PDVSA in Curacao is working at minimum capacity while awaiting new crude shipments and as a tanker backlog in the country’s ports began to ease, four sources close to the facility told Reuters. PDVSA’s operations this year have been mired by problems ranging from fast-declining crude production and poor refining due to a lack of equipment, to obstacles for exporting oil amid port congestion and financial sanctions. Only a few units at the Curacao refinery have been operating during U.S. producer ConocoPhillips’ moves to seize PDVSA’s inventories, cargoes and facilities following a $2 billion arbitration award by the International Chamber of Commerce in April.