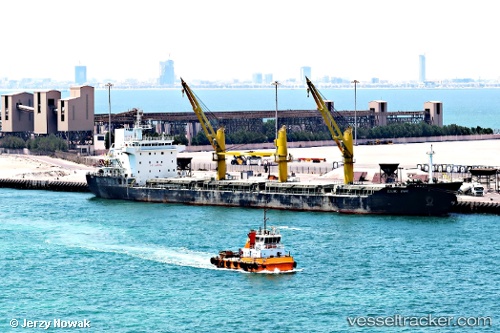 Cosco Shipping mega-containership largest to ever call a Saudi Port

Saudi Arabia and Bahrain banned Iranian-flagged vessels from their ports and operation in their national waters, after the both countries cease diplomatic relations with their neighbor. Tensions between Saudi Arabia and Iran increased a few weeks ago after the execution of Shiite cleric Nimrah Al-Nimrah. Bahrain as well banned cargo ships, which had Iran is last three ports of calls, but Saudi Arabia still did not imposed such restriction. The both middle East countries banned deals undertaken with Iranian flagged vessels until further notice. The ban will not seriously harm the trade in the vicinity, as Iran was long time under the international sanction, which were supported by Saudi Arabia and Bahrain. However, the shipping companies expect to have troubles with operations on the routes in Middle East. http://www.newsmaritime.com/2016/saudi-arabia-and-bahrain-banner-iranian-flagged-vessels/

Saudi Global Ports LLC (SGP), a joint-venture company formed between the Public Investment Fund (PIF) of the Kingdom of Saudi Arabia and PSA International (PSA) started its commercial operations this month, at the second container terminal in the King Abdul Aziz Port in Dammam, a key gateway port on the Arabian Gulf. On 23 April 2015, SGP handled the first commercial vessel, M/V NIARA, owned by Orient Express Line. 1,011 TEUs were handled on this 2,000-TEU capacity vessel. Located in Saudi Arabia’s Eastern Province, Dammam City, phase 1 of SGP’s terminal has 16 metres of water depth, the deepest in the region, and is equipped with six quay cranes of 23 container row span on 700 metres of quay. When the new SGP terminal is fully developed, it will have a quay length of 1,200 metres and 12 quay cranes, with a designed capacity of 1.8 million TEUs per annum. Mr Tan Chong Meng, Group CEO, PSA International, said, “The completion and start-up of PSA’s first container terminal in Dammam testifies to PSA’s commitment to the Kingdom of Saudi Arabia.