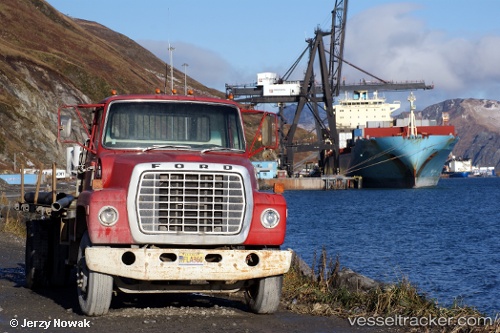 French boxline is looking to make some quick cash from offloading assets of new acquisition Neptune Orient Lines (NOL). Bloomberg is reporting CMA CGM has put NOL’s terminals up for sale for $1bn. APL operates the following terminals on the U.S. West Coast: Los Angeles and Dutch Harbor. In Asia, APL has terminal facilities in Japan at Kobe and Yokohama, and at Kaohsiung, Taiwan, as well as joint ventures in Vietnam, Thailand, China and the Netherlands. The Wall Street Journal reported last month that HSBC and BNP Paribas are assisting CMA CGM with the terminal sale. On sealing the deal to get NOL, CMA CGM said it would look to sell assets and cut costs to make around $1bn in the coming two years.

Singapore-headquartered container carrier APL will start a new weekly US-flagged service to connect key markets in north Asia with the US west coast, from where it will have inland rail connections. Eagle Express Service (EXI) will rotate between the ports of Qingdao, Shanghai, Busan, Los Angeles, Oakland, Dutch Harbor, Yokohama, Busan, Naha, Qingdao, and back to Shanghai. Six vessels with a nominal capacity of 5,100 teu will be deployed for the service. The first sailing will be from Qingdao, China, on 1 November. EXI also provides speedy transits to Los Angeles in just 13 days from Shanghai, China, and 11 days from Busan, South Korea. "We are committed to adding robustness to the supply chains of our customers. Whether it is shipment to the US west coast or its inland destinations, time-sensitive shippers can now take advantage of the superior transit times and on-time assurance offered by APL's Eagle Express Service," said APL president Kenneth Glenn. EXI includes exclusive calls at the ports of Dutch Habor, the United States, and Naha, Japan, allowing westbound shippers to gain access to these markets. Shipment from Dutch Habor will take only seven days to arrive in Yokohama, Japan. http://www.ihsmaritime360.com/article/19494/apl-starts-north-asia-us-west-coast-service

Shell is planning to return to Unalaska this summer, pending final approval from regulatory agencies, and does not plan to leave anchoring systems in the water when rigs are not present, according to Unalaska Ports Director Peggy McLaughlin. Despite her fears of Shell snagging a barge full of frozen fish towed by a tugboat in Natkeekin Bay and local residents’ concerns over the loss of fishing grounds near the oil rigs, the state Department of Natural Resources last week granted the oil company permits for three offshore anchorages in Unalaska. “As barges adjust the towing wire between the tug and barge, the wire will often slack and drag. This event could potentially result in fouling with a wet stored anchoring system,” according to McLaughlin, who said a fleet of 28 Shell vessels, including the two big oil rigs, is expected in local waters in June. The proposed Nateekin Bay anchorage, at the entrance to Captains Bay, is a “natural choke point,” McLaughlin said, where tug and barge tows are the “primary concern.” “Captains Bay is heavily transited by the marine industry,” McLaughlin said, and is the site of the large Westward Seafood plant, two marine fuel tank farms and the container cargo tugboat and barge company Alaska Marine Lines, formerly Northland. http://www.adn.com/article/20150314/unalaska-residents-concerned-about-shell-mooring-sites