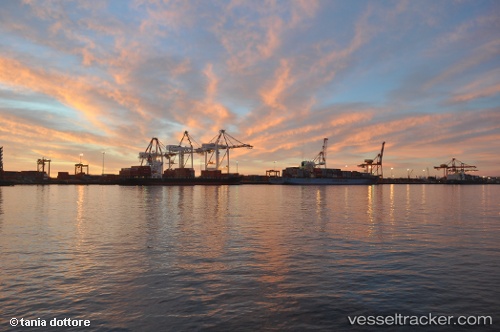 THE arrival of the $1 billion OVATION OF THE SEAS has drawn scores of spectators to Fremantle, with enthusiasts eager to catch a glimpse of the largest cruise ship to enter Australian waters. Welcomed by the traditional water cannon salute and drummers on South Mole, the vessel arrived with much fanfare on its maiden visit to the port city. Launched in April, OVATION OF THE SEAS is 348m long, 3m longer than the QUEEN MARY 2, has a gross tonnage of 168,666 and can carry 4905 passengers in its 2091 rooms. One of its most talked-about features is Bionic Bar, where robots prepare and deliver drinks. The size of the ship required extensive planning on the part of Fremantle Ports to ensure it was brought safely in and out of the harbour. source : perthnow

Approval of LNG Bunkering at Port of Fremantle an "Australian First"

EVOL LNG Thursday announced that the Fremantle Port Authority (Fremantle Ports) has given approval for the company to conduct liquefied natural gas (LNG) bunkering at the port - a development that EVOL LNG says is an "Australian first." The company says it will have the capacity to supply ships with up to 45 tonnes of LNG per hour, and provide the fuel at a competitive price against low sulfur marine diesel. "The availability of LNG as a bunker fuel, which will be delivered from EVOL LNG's Kwinana LNG plant, will pave the way for LNG-fuelled ships to visit the port, and provide the option for local ferries and workboats to switch to the lower-cost, lower-emission fuel," stated the company. http://shipandbunker.com/news/apac/617873-approval-of-lng-bunkering-at-port-of-fremantle-an-australian-first

FREMANTLE’S lucrative cruise ship trade has been put at “risk” by the State Government’s plan to privatise the port, according to the City of Fremantle. A council report says the benefits of the cruise industry, which brings in 100,000 passengers a year, “is at a very high risk of being lost in the move to a private port operation”. Privatisation of the port is expected to fetch “$1.5 billion to $2 billion” as part of the State Government drive to ­reduce its debt. Neither the City of Fremantle nor the board of Fremantle Ports had been consulted about the sale prior to the Budget announcement, the paper, to be considered on Wednesday, also reveals. It is understood terminal fees charged by Fremantle Ports are much less for cruise ships than for commercial shipping, the report states, asking: “Where does a private operator put their priority for visitation?” http://www.theaustralian.com.au/news/fremantle-ports-sale-could-sink-cruise-trade-city-of-fremantle/story-e6frg6n6-1227407734183